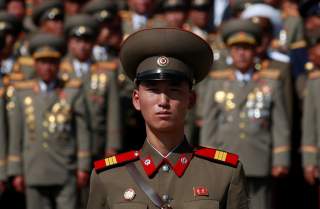 As the intelligence community has now openly affirmed, the idea that the Trump administration could reach an Iran-like deal with North Korea—in which negotiated quid-pro-quos were consummated in one large package—was always an illusion. I don’t think I know a single North Korea watcher who believes that the prospects of complete, verifiable and irreversible dismantlement of Pyongyang’s nuclear-industrial complex are good. Yet neither of those facts affects the need to put in place a robust negotiating process that could make progress on some interim steps.

U.S. bargaining power in this regard has been weakened by the Singapore summit. Even for those who supported the first summit—myself included—the concessions made by the Trump administration were sweeping. The cancellation of exercises is easily reversible. But buying into North Korea’s conception of denuclearization “of the whole peninsula,” as well as situating denuclearization in the context of the normalization of bilateral relations (read sanctions relief) and movement toward a peace regime is straight out of Pyongyang’s playbook.

Before being too harsh on the Trump administration’s ad hocery, however, it is important to remember some geostrategic realities. Pyongyang continues to hold Seoul hostage; military options are limited. And while sanctions have clearly played a role in moving North Korea leader Kim Jong-un to the table, China’s ongoing patronage makes maintenance of the pressure campaign an ongoing challenge.

So what is likely to transpire? Perhaps there will be some deals struck at the summit itself, such as an aspirational statement on replacing the armistice, destruction of this or that for the international press, or a codification of a freeze: on nuclear and missile testing (which the North Koreans have smartly suspended) or production of fissile material or missile manufacturing and deployment (which they have decidedly not).

Given the difficulty of getting a credible declaration of North Korea’s facilities, however, the likely path forward will probably gravitate back to Bush negotiator Christopher Hill’s strategy in 2008: to focus on Yongbyon as an entry point.

In return, America will have to consider sanctions relief, but not through revision of UN Security Council resolutions or secondary sanctions; if those are unwound, the game is up. Rather, the obvious trade is to give the Moon administration some running room with respect to North-South relations. If taken in small steps that do not commit a large amount of resources prior to progress on the nuclear front, the risks seem low to me; how long we can expect Seoul to line up with the Trump administration on every issue—as it has essentially done—if there is no game plan?

Stephan Haggard is the Lawrence and Sallye Krause Professor of Korea-Pacific Studies, director of the Korea-Pacific Program and distinguished professor of political science at UC San Diego. His focus on the Asia-Pacific region includes extensive work on North Korea with Marcus Noland, including “Hard Target: Sanctions., Inducements and the Case of North Korea” (2017).