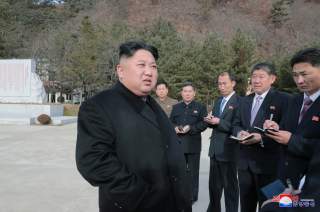 As the intelligence community leadership testified to Congress, there is little likelihood of Kim Jong-un giving up his nuclear weapons. The best-case outcome from the second Kim-Trump summit would be a continued halt to missile and nuclear testing by North Korea, promises to limit its existing nuclear stockpiles, and an offer to close down the 5 MW reactor at Yongbyon (the source of bomb-grade plutonium), which has been on its last legs for a long time with possible verification by IAEA inspectors at that facility alone. The centerpiece of such an agreement could be a promise—one that will not necessarily be honored—from North Korea to dismantle its ICBMs, which threaten the U.S. homeland.

In return, the U.S. will look for ways to ease sanctions—which will not be easy due to UN resolutions and U.S. laws. Since Washington continues to insist that it will maintain sanctions until “full and verified denuclearization," the Trump administration could allow Seoul to seek UN exemptions to embark on its stalled plans to carry out a range of economic projects with the North, from the restart of the Kaesong industrial park and the Mt Kumgang tourist resort to the construction of rail, road and possibly pipelines linking north and south and onward into Russia and China. The United States could also open a liaison office in Pyongyang, grant a peace declaration, and agree to keep its nuclear weapons outside the Korean Peninsula—not a hard promise to make since the United States long ago redeployed its tactical nuclear weapons from the peninsula.

An ICBM agreement, however, would leave intact not only North Korean nuclear warheads but also over 600 short and medium-range missiles aimed at Japan and South Korea. Such a deal could allow North Korea to consolidate its status as a nuclear-armed state. Even so, such a deal would hardly be catastrophic, and some may even welcome it. But if President Trump feels compelled to promise Kim a reduction or even pullout of U.S. forces from South Korea in return for greater concessions from the North—another possible scenario—then that would be a disaster for South Korea and Japan, because it would leave them to face a nuclear-armed North Korea alone.

Although unlikely, such a scenario is not far-fetched. After all, Trump is pulling U.S. troops out of Syria and has also discussed U.S. withdrawal from NATO because he feels its members do not pay enough for the privilege of being defended by the U.S. And Seoul and Washington are currently in a standoff over a cost-sharing deal for the 28,500 American troops stationed in South Korea. Even though Seoul spent $864 million last year to support U.S. forces, Trump has repeatedly demanded that South Korea double its contribution to about $1.6. billion per year. With Jim Mattis and H.R. McMaster gone from the administration, the pressure from Trump’s aides to maintain U.S. troop presence in South Korea is not as strong as it once was. He could easily decide on a pullout. Thus, although it’s still not a high-probability outcome, we need to be prepared for a deal that would lead to the United States to leave its closest allies in Northeast Asia in the lurch.

Dr. Sue Mi Terry is Senior Fellow for the Korea Chair at the Center for Strategic and International Studies (CSIS). Previously, she was the director for Korea, Japan, and Oceanic affairs at the National Security Council, and a senior analyst on Korean issues at the CIA.