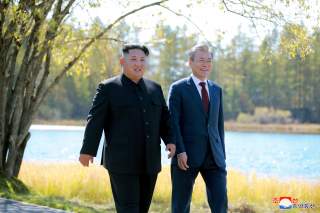 Whether the second Trump-Kim summit succeeds or fails depends heavily on whether the two leaders focus on a few limited, attainable objectives or opt for posturing about a comprehensive accord on North Korea’s nuclear program. Unfortunately, the Trump administration (like its predecessors) still insists on getting Pyongyang to capitulate and accept complete, verifiable, and irreversible denuclearization. Such an outcome is improbable on this or any other occasion.

Instead of continuing that quixotic quest, Washington should pursue a more realistic objective: building a normal relationship with Pyongyang, thereby reducing tensions on the Korean Peninsula. One feature of that new relationship would be a compromise in which Pyongyang provides a full accounting of its nuclear weapons stocks and delivery systems, along with accepting verifiable limits on both components. The United States would no longer seek the total abolition of North Korea’s nuclear and missile capabilities.

The opportunity for significant progress toward such a compromise exists at the summit. Moreover, to facilitate a more cooperative relationship, the United States should propose a series of modest but important steps. One would be an agreement to formalize the current implicit bargain in which Pyongyang has refrained from conducting nuclear and ballistic missile tests and the United States has put the annual U.S.-South Korean military exercises on indefinite hold. Another worthwhile offer would be to propose immediate negotiations for a treaty ending the state of war on the Peninsula. A corollary to that process would be the establishment of formal bilateral diplomatic relations.

President Trump should indicate his willingness to lift some economic sanctions in exchange for a freeze on North Korea’s development of nuclear weapons and Pyongyang’s acceptance of international inspections to verify compliance. In addition, the president should pledge that if Kim’s government abides by all of its commitments (and continues to reduce tensions with South Korea), he will subsequently seek congressional legislation rescinding most remaining sanctions.

Unfortunately, prospects for achieving even some of those relatively modest goals at the summit are not good. Trump is surrounded by advisers, most notably Mike Pompeo and John Bolton, who seem inclined to sabotage any conciliatory instincts he has on Korea policy and other international issues. If the president does not disregard their congenitally hawkish advice, the summit is likely to end in failure—perhaps spectacular failure. That outcome would re-ignite the alarming tensions on the Korean Peninsula that we witnessed in 2017.

Ted Galen Carpenter, a senior fellow in security studies at the Cato Institute and a contributing editor at the National Interest, is the author of 12 books and more than 750 articles on international affairs.