North Korea and the U.S. 2020 Primary Candidates for President: What Are the Policy Options? 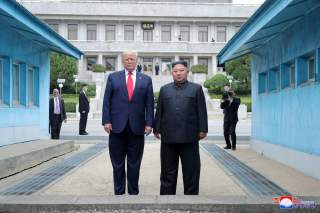 The primary season in the United States is heating up. Just a few days ago, the Democrats held a raucous debate in Nevada. Michael Bloomberg, the former mayor of New York City, is emerging as a moderate alternative to former Vice President Joe Biden. Meanwhile, self-declared socialist Bernie Sanders is widening an unexpected lead. On the Republican side, sitting U.S. President Donald Trump is all but unchallenged in the Republican primary.

The Democratic debates have not focused much on foreign policy, and President Trump has been content to say little on it. His Twitter commentary on the Democratic primary has, unsurprisingly, focused on stirring the pot among the various contenders. But as the election matures, there will inevitably be a turn toward world politics as the commander-in-chief role is so central to the modern presidency.

When that debate comes, North Korea will play a curious trial balloon role. China will dominate most likely, as will Trump’s disruptive attitude toward U.S. alliance partners, but policy toward the North will likely show the differences most glaringly, because it is such an intractable, decades-old problem.

In a useful overview of contemporary U.S. grand strategy thinking, Heather Hurlburt finds three broad strain of thinking – realist, progressive, and traditional liberal internationalist. These can be helpfully grafted onto the primary, and one might also add a neoconservative sheen to the last one to cover Bloomberg now that he is surging on the Democratic side

The North Korean status quo is very persistent. Trump tried years of, first, threats, and then inducements to encourage North Korea to change. His efforts have broadly failed. His much-hyped negotiations with Pyongyang have ground to a halt, similar to the experience of his predecessors for many decades before him. In the end, Trump, like so many others who have tried to tackle this problem, has fallen back to continuing the containment, isolation, deterrence, and sanction of the North. This is not very satisfying, but it is the default approach.

Endorsing this status quo is an easy way to broadcast seriousness for any candidate. Trump’s various engagement efforts have had a fanciful, theatrical element to them, with made-for-TV moments like Trump walking around inside North Korea despite the lack of any serious deal between the two sides. I would imagine that establishment and centrist candidates such as Biden or Klobuchar will probably stick to this. Trump will likely be forced into this position too, even though he really wants a deal. Helpfully though, this is the low-cost political option, because North Korea is highly unlikely to change.

The progressives in the race, most obviously Sanders and Senator Elizabeth Warren might look to larger leftist thinking that U.S. foreign policy is too militarized and the U.S. military budget too large now. Ideas here regarding Pyongyang might include retrenchment from South Korea, or giving into North Korea’s primary demand – a permanent Korean Peninsula peace treaty which includes acceptance of the North as a sovereign, nuclear weapons-possessing state.

No president has ever gone this far to the left on North Korea, but then no feasible presidential candidate has called himself a ‘socialist’ before either, as Sanders is doing now. It is possible that if a progressive wins the Democratic primary, all sorts of previously undiscussed options will emerge.

Curiously, the retrenchment option might have some appeal to Trump and realists. Trump thinks South Korea is a free-rider who should pay more. Progressives would similarly note that one way to cut the U.S. defense budget and demilitarize its foreign policy is to step back from hegemony where allies are capable. Wealthy South Korea is certainly that.

3. Liberal internationalism (and neoconservatives) has little left to say on North Korea

Liberal hegemony was arguably the dominant mode of U.S. foreign policy between the end of the Cold War and the Trump presidency. And Hurlburt’s review illustrates how many U.S. grand strategists still long for some kind of US alliance architecture supporting the global promotion of liberal norms. The problem with North Korea is that this is the sort of international framework which it built nuclear weapons to keep at bay.

Liberal hegemony, and its more aggressive neoconservative twin, share the instinct to meddle, to push non-democratic, non-liberal states toward more open forms of government. While this is normatively attractive and morally appealing, it is pretty clear now, after thirty years, that this pushy liberalism fires backlash. Russia’s counter-punching to NATO expansion nicely illustrates this, as does Islamic fundamentalism’s fear of ‘westoxification.’ In the North Korean case, it was the aggressive liberalism of the neocons that pushed it toward nuclear weapons as a shield against regime change action by the U.S.

The candidates to whom this might appeal are likely Bloomberg and former Mayor Peter Buttigieg, as well as Trump perhaps, if his frustration with stalled North Korea negotiations boils over.

But the political risks of hawkishness toward North Korea are huge. We can always sanction Pyongyang yet further, but that is a tool of diminishing returns. Any suggestion of airstrikes or a ‘bloody nose’ would raise huge war fears from 2017 all over again. There is little we can do to pressure North Korea militarily. In the end, I imagine Bloomberg, Buttigieg, and Trump will bluster but pass on this option.

In the end, that leaves the ‘realist’ status quo option and a more progressive, radical concessions option. It is unclear now who is winning that debate, and that alone is change from the long-standing willingness to accept the status quo.