North Korea: Biden and Moon Should Focus on Complete, Verifiable, and Irreversible ‘Action’ 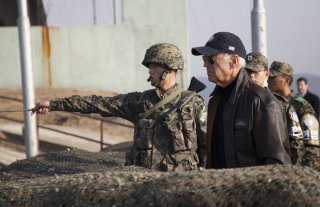 When President Moon Jae-in visits the White House on May 21st, President Joe Biden expects his South Korean counterpart to roll up his sleeves and get down to work. Every day counts.

It doesn’t matter that President Moon’s domestic ratings are flagging as he embarks on his fifth and final year in the Blue House. President Biden knows what he wants to do, and he understands that alliances represent ‘force multipliers’ for getting things done.

Koreans are already shouldering more of the world’s burdens these days. South Korea’s presence at the Group of Seven (G7) meeting in London earlier this month punctuated Seoul’s increasing responsibility for upholding global order. While the delegation led by Foreign Minister Chung Eui-yong participated as a guest—along with India, Australia, South Africa, and Brunei representing ASEAN—the host United Kingdom did not issue invitations because of British hospitality. The UK, Canada, France, Germany, Italy, Japan, and the United States want other advanced economies and leading democracies to help fix a world in considerable turmoil. Working together, a reinvigorated G7-plus is helping to establish rules of the road for peace and prosperity.

Having completed a rigorous review of North Korea policy, the Biden administration plan for managing North Korea is sure to figure prominently in Washington. But while North Korea remains an abiding national security concern, the DPRK consumed only two of the 87 paragraphs of the G7 communiqué. Those paragraphs highlighted Pyongyang’s role as a humanitarian disaster, a serial abuser of human rights, and a United Nations Security Council resolutions violator. In other words, the ROK is a law-abiding provider of global public goods, and the DPRK is a law-breaking dispenser of global public bads.

As publicly revealed, the Biden administration’s North Korea policy review strikes a calibrated approach for ensuring deterrence and defense while actively seeking diplomacy. As Secretary of Defense Lloyd Austin argues, the administration’s concept of integrated deterrence aims to elevate the role of diplomacy. However, high among the diplomatic hurdles is Kim Jong-un’s apparent determination to make North Korea a permanent nuclear-weapon state.

Deliberating over what to do about North Korea’s weapons of mass destruction (WMD) has been a persistent theme of US policy, alliance consultation, and international dialogue for some years. After the 1994 Agreed Framework broke down in large part over North Korea’s secret uranium-enrichment activity, President George W. Bush called for “complete, verifiable, and irreversible dismantlement” or CVID. During the Trump administration, the phrase was modified to read “final and fully verifiable denuclearization” or FFVD. If the G7 communique formulation is any indication, the Biden administration seeks the “complete, verifiable and irreversible abandonment” or CVIA of North Korea’s illegal weapons programs.

The new formulation suggests a distinction without a difference. Denuclearization remains America’s long-term objective. Further, the US is steadfast in supporting international law and UN Security Council resolutions. However, CVIA may assist with diplomacy by easing Pyongyang’s burden of proof that it’s interested in abandoning WMD. Kim can embrace his June 2018 Singapore Declaration point “Reaffirming the April 27, 2018 Panmunjom Declaration, the DPRK commits to work toward complete denuclearization of the Korean Peninsula.”

But there is more broken in relations with North Korea than a new acronym can repair. The fundamental problem is a lack of political will to make the concessions required to persuade the other party to make a deal. Kim treasures his nuclear deterrent, not just out of fear and insecurity to forestall foreign intervention but also for domestic and foreign bragging rights and intimidation. Past decades have taught the Kim regime to value nuclear weapons, and even modest concessions are likely to demand a steep price in reduced sanctions.

Yet, CVIA may open the door to expert discussion about practical, step-by-step actions that improve security without rewarding North Korea’s unlawful behavior. Based on past results, this baby-step approach may well fail to produce satisfactory results. But that’s the beauty of Biden’s flexibility: even if negotiations fail, the allies can preserve stability. Indeed, crisis-management mechanisms should continue to be on the agenda for the two allies and Northeast Asian neighbors. That buys time for working on other pressing matters on the international agenda—from the pandemic and climate change to supply chain security and high-tech competition.

Diplomacy is mainly about moving forward in the right direction, even if the path is longer than most like. So, it may be closer to strategic patience than the all-or-nothing attitude that some ascribed to the failed Hanoi summit; even so, the focus is on diplomacy, not conflict.

In contrast to past resort to hyperbole, President Biden knows it's prudent to keep expectations modest when dealing with North Korea. But he also knows he needs to talk, especially given President Moon’s hefty investment in inter-Korean rapprochement. Whatever next year’s election brings, the next South Korean government is more important to the Biden administration's positive goals for the region and the world than is North Korea’s willingness to use major lethal force that would trigger a devastating response.

As with Russia and China’s gray-zone assertions, North Korea is likely to avoid open conflict but carry on with political warfare, illicit economic and cyber activity, and military modernization. A stable diplomatic process might lessen the severity of North Korea’s microaggressions. But a balanced and flexible posture of the Biden administration, working hand in hand with Seoul, ensures that the allies can keep a solid footing regardless of Pyongyang trying to pull the rug out from beneath them. Until or even after North Korea accepts offers to resume inter-Korean dialogue and substantive working-level talks with the United States, the alliance will remain strong, ready, and in a state of constant improvement.

Meanwhile, Biden and Moon should continue to advance their global response to the ongoing pandemic and its economic dislocations, address vital issues related to cyber and supply-chain security, high-tech competition, and tackling climate change. As much as the world may want to know more details about America’s emerging North Korea policy, far more urgent is the need to see democracies in action. Even if North Korea refuses to embrace nuclear ‘abandonment,’ Presidents Moon and Biden can on so many other essential issues showcase complete, verifiable, irreversible ‘action.’

This essay was originally published in Korean in the South Korean daily newspaper, DongA Ilbo