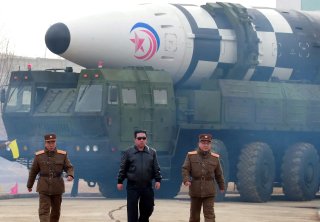 The North Korean government stated on Monday that it had conducted a series of missile tests the previous week—the largest single demonstration of the country’s weaponry since the end of the Korean War—as a response to perceived U.S. aggression on the Korean peninsula in recent weeks.

The North Korean state-run Korean Central News Agency (KCNA) announced that the country’s missile tests had been intended to simulate attacks on U.S. and South Korean targets in South Korea. It noted that some of the missiles would have contained nuclear warheads in a real conflict without elaborating on which targets those missiles had been directed at.

The missile tests occurred as part of a response to the joint U.S.-South Korean Vigilant Storm air exercises, which involved more than 200 aircraft and thousands of pilots and ground personnel from both nations. The KCNA report described the drills as an “openly provocative act” and a “dangerous war drill,” claiming that Washington had sought to “intentionally aggravat[e] tension in the region” as its primary aim. Due to the “aggressive nature” of the exercise, the general staff of the North Korean army insisted that an equivalent show of force was required from Pyongyang.

In addition to its missile launches, the KCNA report indicated that the country had deployed 500 fighter jets within its territory and fired hundreds of artillery shells and rockets into the sea. The press report did not specifically mention the three missiles that Pyongyang fired toward Japan last week, leading thousands of Japanese on the country’s main island of Honshu to take shelter.

Tensions between North and South Korea are fraught but they have grown substantially worse over the past year. North Korea’s largely ceremonial parliament passed a law in September enshrining the country’s nuclear capabilities into law and characterizing the possession of nuclear weapons as “irreversible,” formally ending the country’s negotiations with the West.

At the same time, the replacement of former president Moon Jae-in, a relative liberal on North Korea issues, with hardline incumbent Yoon Suk-yeol earlier in the year has boded poorly for the inter-Korean relationship. However, Yoon has repeatedly emphasized that he remains open to negotiations with Pyongyang, and he unsuccessfully proposed a “grand bargain” of substantial economic aid in exchange for North Korea relinquishing its nuclear weapons in August.