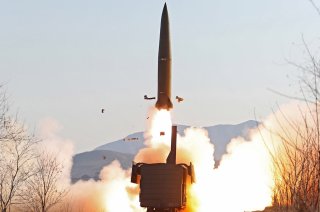 With the world’s eyes on Russia and Ukraine, North Korea carried out yet another missile launch over the weekend.

According to Yonhap News Agency, the launch, which was North Korea’s eighth of the year, was swiftly condemned by the United States. All seven of the previous launches took place in January, and none were launched during the duration of the Winter Olympics in China.

“The United States condemns the DPRK's ballistic missile launch," the State Department said Sunday. "This launch, like the other launches earlier this year, is a clear violation of multiple United Nations Security Council resolutions and demonstrates the threat the DPRK's illicit weapons of mass destruction and missile programs pose to the DPRK's neighbors and the region as a whole.”

Lee Jong-joo, spokesperson for South Korea’s Unification Ministry, said after that launch that "we will thoroughly prepare for all possibilities down the road,” adding that South Korea will assess whether there is any truth to the claims about North Korea’s work on a reconnaissance satellite. North Korea had hinted at such a product during its Workers’ Party conference last year.

The reported launch came just weeks before South Korea’s presidential election, and the North Korean regime has often made a practice of challenging new leaders in both South Korea and the United States.

Another Yonhap report over the weekend stated that North Korea was developing a "reconnaissance satellite." However, South Korea, the United States, and other nations characterized it as a missile launch.

"The DPRK National Aerospace Development Administration (NADA) and the Academy of Defence Science conducted an important test on Sunday under the plan of developing a reconnaissance satellite," the Korean Central News Agency (KCNA) said, as cited by Yonhap.

Meanwhile, as reported by the Daily Beast, Korean state media has released a commentary about events in Ukraine.

In the commentary, titled “The U.S. Should Not Shake International Peace and Stability at the Basis,” North Korea blamed the “high-handedness and arbitrariness” of the United States and its “vassal forces” for instability in the world.

“It is not without reason that the international media and experts comment that the contributing factor to the Ukrainian crisis is the imbalance of power in Europe due to the unilateral expansion of NATO and its threat as well as the grave threat to the national security of Russia,” the commentary said. “The U.S embellishes its own interference in internal affairs of others as “righteous” for peace and stability of the world, but it denounces for no good reason self-defensive measures taken by other countries to ensure their own national security.”