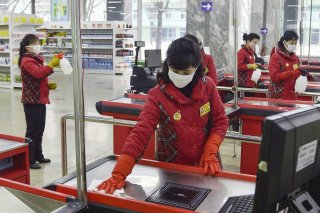 Throughout the pandemic, North Korea’s regime has been claiming that it has suffered no cases of coronavirus. Very few people who follow either public health or North Korea believe that, but the regime has said it repeatedly anyway. This is despite the fact that North Korea shares a border with China, which has been especially hard-hit by the virus. Numerous reports that the regime has no particular strategy for combating the pandemic.

“News of countries vaccinating their people or life returning to normal is rarely, if ever, transmitted within North Korea, perhaps over fears that it might trigger resentment against the regime for its failure to secure shots,” Pratik Jakhar of BBC Monitoring wrote in an op-ed published by Foreign Policy last month. “In contrast, the propaganda apparatus has been unusually quick to report on cases rising abroad and the spread of COVID-19 variants.”

And now, they have claimed zero cases once again.

According to NK News, the North Korean regime claimed in its most recent report to the World Health Organization that it had tested 1,368 people between August 27 and September 9, with no positive cases in that time.

"All those guys in the red hazmat suits, which were really striking, that wasn’t directed to us, that was directed to the North Korean people basically saying that the regime has this well in hand because it obviously doesn’t,” Gordon Chang, author of "Nuclear Showdown: North Korea Takes on the World,” told ABC News.

Much of the U.S. media reaction to that parade had been to point out that North Korean leader Kim Jong-un “stole the show,” including comments on his sharp suit and continuing weight loss.

“Kim Jong Un still managed to seize the spotlight by looking thinner and more energetic than he has in years. During the event late Wednesday, Kim, wearing a cream-colored suit and a shiny white tie, emerged as the clock struck midnight,” CBS News said of the parade. “He beamed in response to thunderous applause from performers and spectators filling Pyongyang's brightly illuminated Kim Il Sung Square, named after his grandfather, the country's founder.

The New York Post noted that Kim had “shown off [his] new body at North Korean parade,” while also noticing that North Korea did not show off any missiles at the parade. The regime then launched multiple missiles the following week.

Meanwhile, on Fox News that week, contributor Rachel Campos-Duffy noted that Kim was looking "better than our president,” before another host on that network speculated that the man at the parade wasn’t actually Kim, but rather an impostor.