In North Korea, a Crisis of the First Order If Kim Jong-Un Is Dead 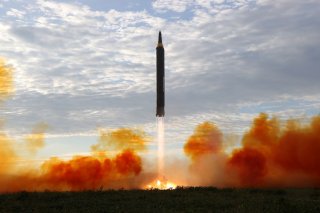 A succession in any one-man state is an epoch-changing event, but in no one-man state is the one man as important as he is in the Democratic People’s Republic of Korea, often described as a cult built around the Kim family. The death or incapacity of a Kim leader, therefore, is a crisis of the first order.

Moon Chung-in, a foreign policy advisor to South Korea’s president, told CNN on April 26 that Kim is “alive and well.”

The North Korean leader was a no-show at two important events, the April 15 Day of the Sun, commemorating the birth of regime-founder Kim Il Sung, and Saturday’s celebration of the 88th anniversary of the founding of the Korean People’s Army. Prior to this year, Kim Jong-un had not missed a Day of the Sun event since succeeding his father in 2011.

The current crisis is compounded because there has been, as far as we can tell, no succession planning. Regime-founder Kim Il-sung devoted two decades to training his son, Kim Jong-il. Kim Jong-il spent two years getting Kim Jong-un ready to be the next tyrant. Kim Jong-un, in his mid-thirties, probably thought he did not need to designate and train a successor.

We can now expect infighting to be intense. Transitions of Kim rulers are inevitably followed by death—Kim Jong-un is thought to have executed about 500 senior regime figures to consolidate his power—so any transition is bound to be bloody, more so because this time there is no obvious figure to head the regime.

The regime needs, at least somewhere in the mix, a Kim family member to emphasize its legitimacy, thought to be derived from the “Paektu bloodline” as it is called.

As for a Kim successor, Kim’s eldest child, a 10-year-old, is obviously not ready to rule. Kim’s older brother, Eric Clapton fan Kim Jong-chol, was passed over last time because he obviously did not inherit the dictator gene.

There are two Kim contenders who will surely be vying for the top spot: Kim Jong-un’s younger sister, Kim Yo-jong, and uncle Kim Pyong-il.

Both suffer handicaps. Yo-jong made her first public policy statement only last month, and a female would generally be considered ineligible to rule in the North’s Confucian-influenced society. Pyong-il has been sidelined for four decades and only recently returned to North Korea from diplomatic postings in Europe. The two Kims could tear the regime apart as they struggle to win the top spot.

However succession pans out, President Trump’s nuclear diplomacy, which was dependent on his personal relationship with Kim Jong-un, will suffer a setback. As senior figures fight, Pyongyang will be in no position to deal with Trump on anything, much less something as controversial as “denuclearization.” No one will take a risk at such a sensitive time.

Look for China to try to exert influence over the North in the coming months, but Kim Jong-un has purged many China-friendly regimes figures, like his uncle Jong Song-taek. This means the Chinese, like the Americans, will be bystanders to the tumultuous events in the North.

Why does the world care about what happens in an isolated regime? “If we lose, I will destroy the world,” Kim Jong-il, Kim Jong-un’s father, was reported to have said, expressing the sentiments of his father, Kim Il-sung.

We don’t know whether younger Kim family members also share such thoughts, but their renegade regime possesses all forms of weapons of mass destruction and the means to deliver them. Will a family member, during a rough transition, change the course of human events with an act of unimaginable devastation?

No one wants to find out.