North Korea Declares: "Denuclearization Is Already Gone Out of the Negotiating Table" 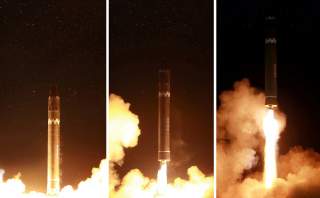 If one had a smidgeon of hope that North Korea’s denuclearization was still a realistic option, it might have evaporated this weekend.

Days after a number of senior North Korean officials castigated President Trump for pulling the “Rocket Man” monicker off the shelf, it sure looks like North Korea’s ambassador to the United Nations put the final nail in the denuclearization coffin.

“We do not need to have lengthy talks with the U.S. now and denuclearization is already gone out of the negotiating table,” Kim Song said in a statement before condemning six European powers for calling attention to the North’s 13 rounds of ballistic missile launches. No subtext needed: the Kim regime is no longer willing to sit down face-to-face with the Americans and waste any more time in what it depicts as an undignified process. Trump, it appears, will be but the latest U.S. president to have tried and failed to get the North Koreans to dismantle their nuclear deterrent.

If Trump is shocked at the news, he hasn’t been paying very much attention over the preceding 18 months. Two summits, one meeting at the Demilitarized Zone, one joint declaration, several letters, and happy words about friendship later, North Korea is no closer today to the proverbial denuclearization than it was when Trump swore the oath of office. If anything. Pyongyang has only gotten further away; Stanford University’s Siegfried Hecker, Robert Carlin, and Elliot Serbin have assessed that in 2018, the North generated uranium and plutonium for an additional 5-7 nuclear weapons. The bomb fuel production and short and medium-range missile launches haven’t stopped. Work at the main Yongbyon research facility has been continuing like normal. There have been no caps or rollbacks of the North’s arsenal. On the nuclear front, negotiations have produced nothing other than a suspension of Pyongyang’s nuclear tests—and even this was more of a declaration made unilaterally by Kim Jong-un than the product of the talks themselves.

None of this is a surprise. Yongbyon remains in operation because no agreement has been signed. Besides a flashy and vague press communique between Trump and Kim in June 2018 that sought to set the scene for a historic agreement, the top-down diplomacy can best be characterized as all talk, no action. What the talks have achieved, however, is a significant lowering of tensions. Given the hair-on-fire days of 2017, this is a deliverable in and of itself. Yet the North Korean ambassador’s remarks this weekend could jeopardize even that.

Trump, with a tough election year ahead of him, will now be deprived of the magical denuclearization deal he likely hoped to use on the stump as an example of his negotiating acumen. The concern now is that the president, taking Pyongyang’s refusal to denuclearize as an act of disrespect, will revert back to his pre-2018 policy of banging the war drums. This would serve some political purpose during campaign season, when macho rhetoric against U.S. adversaries can get a lot of applause breaks at rallies. But it would do absolutely nothing to manage the issue before us.

Besides, a return to maximum pressure may very well be impossible at this point. Moscow and Beijing aren’t pleased about North Korea’s nukes either, but neither of them are likely to play ball at the U.N. Security Council if Washington tables another sanctions resolution. And even if the Russians and Chinese were sympathetic to such a course, the Kim regime has demonstrated again and again over the last 13 years that strongly-worded sanctions resolutions don’t necessarily correlate with the strong sanctions enforcement. The North Koreans have perfected the art of sanctions-busting, finding ever more creative ways to get through the fuel oil import caps, the coal export limits, and the banking restrictions. The Kim regime is known to use foreigners to set up bank accounts on its behalf and to depend on foreign governments to look the other way.  All of us have come to expect the usual “These violations render the latest United Nations sanctions ineffective” conclusion in the summary findings of every Panel of Experts’ report.

Washington wouldn’t be able to go back to maximum pressure even if it wanted to.

There is an alternative, but it will require Trump to stop shooting for the stars.

North Korea may not be willing to talk about full denuclearization, but it has never closed the door to a more traditional arms control dialogue where verifiable limitations are placed on its nuclear program. The details of those limitations would be for the experts to decide, but the overall trade would be straightforward: give a little to get a little. If Pyongyang shows an intent to cap its stockpile, cease research, development, stop testing of an ICBM, and grant IAEA weapons inspectors the power to monitor and verify those restrictions, Washington would show an intent to stop blocking cross-border economic projects between the two Koreas and relax the oil and coal quotas now on the books. The exchange of diplomats in one another’s capitals would also go a long way in breaking the ice while providing both countries with the opportunity to establish a channel of communication that can survive the hot-and-cold weather changes in the relationship.

Currently, all of these simple proposals are theoretical. But the bottom line isn’t: there is still an agreement to be had. It will just take political will from two leaders, Trump and Kim, whose personal chemistry is the last guardrail keeping the diplomatic car from skidding off the road.