Is North Korea Facing An Economic and Health Care Crisis? 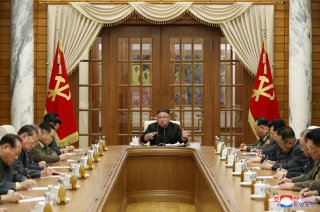 North Korea’s economy is in the pits this year, more so than usual. And the hurt is only likely to grow in the coming months.

This week, the U.S. State Department created a new North Korea-focused website under the Rewards for Justice program. The website will serve as a central clearinghouse for people to inform the U.S. government about possible North Korea-related sanctions violations.Those who provide Information the State Department finds helpful to cracking down on those violations could be rewarded with as much as $5 million. The new effort is yet more evidence that the so-called “bromance” between Donald Trump and North Korean leader Kim Jong-un has largely fallen victim to the same, old hostility that has dominated relations between Washington and Pyongyang ever since North Korea was created in the late 1940s.

For Kim Jong-un, there isn’t much good news these days. Fears of the coronavirus sweeping the North Korean population have forced Pyongyang to impose the strongest social distancing and quarantine measures in the world. North Korea’s borders are shut. Foreigners aren’t allowed in. Trade with China, the North’s key economic lifeline, has ground to a trickle. According to China’s customs administration, Beijing exported only $253,000 worth of goods to North Korea in October, a 99 percent drop from the previous month. Those at the border who don’t enforce import restrictions to a tee risk severe punishment, including execution.

North Korea’s health system is completely unprepared and under-equipped for a nationwide pandemic like coronavirus, which explains why the Kim regime is willing to sacrifice formal trade with its largest trading partner. If it means insulating the country from disease, then business as usual will just have to wait. But one can’t ignore the fact that the United States and UN Security Council sanctions are also a factor for why the North Korean healthcare system is such a disaster. With every humanitarian item under a microscope, it’s no wonder why the North Koreans are treading water.

The UN Rapporteur on human rights in North Korea documented a number of concerns about the sanctions regime in its October report to the Security Council. The general thrust of the report is that sanctions have proven to be a significant obstacle to sending the medicine and medical equipment to Pyongyang, all of which the Kim regime needs if it has any chance at dealing with the coronavirus epidemic (not to mention more common ailments that have plagued the country, such as tuberculosis, hunger, and poor nutrition). “The increased implementation of sanctions has started to seriously affect the entire economy of the country,” the report states, “which is having adverse consequences on the exercise of the economic and social rights of the people.” The surest way to address these concerns, the rapporteur writes, is to reevaluate the sanctions regime currently in place and ensure that humanitarian exceptions are processed as quickly as possible. “Under the unprecedented situation of the COVID-19 pandemic, the need to re-evaluate parts of the sanctions regime is more compelling than ever.”

The UN North Korea Sanctions Committee has taken notice. In fact, it has gone beyond the listening stage and actually implemented what the rapporteur’s office recommended. The U.S. delegation to the UN proposed a rules change of the existing procedures that would speed up the review of humanitarian assistance, particularly as it relates to pandemics and natural disasters. The sanctions committee acted on the request rapidly, which is almost unheard of in the UN bureaucracy. According to the latest procedures, the North Korea sanctions committee will now process humanitarian requests related to pandemics “on an expedited timeframe.” Organizations that have been granted their requests will now have nine months to operate inside North Korea instead of the usual six-month period.

Always looking to exploit the smallest window of opportunity to connect with the North, Moon Jae-in’s administration wants an even more dramatic change to the rules. The South Korean Unification Ministry is working on a proposal that would do away with the case-by-case review of humanitarian requests and replacing it with a quota system, where approved items can be delivered to North Korea as long as it's under a certain amount. Whether Seoul’s idea is accepted by the sanctions committee will be determined, as always, by Washington’s position.

The world is now going through the most extensive public health crisis in a century. Like all diseases, the coronavirus doesn’t respect borders. Over 65 million people have been infected with the virus in practically every country. Over 1.5 million people have died. Poor nations that have rickety health care systems are especially susceptible to outbreaks. It’s on the richest and most capable among us to make sure all nations, regardless of how strange and insular their governments may be, have the tools necessary to protect their populations from a global health menace.