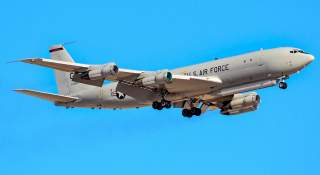 Is North Korea getting ready to test an ICBM, the first such test since 2017? We have at least one sign the answer might be yes--at least according to one branch of the U.S. military.

According to a report in Chosunilbo, a U.S. Air Force E-8C Joint STARS ground surveillance aircraft "buzzed the Seoul metropolitan area on Friday to see if North Korea is preparing any intercontinental missile launches."

The short report states that the aircraft "flew from an area south of Seoul to the East Sea. It seems to be one of the two E-8Cs the U.S. deployed at Kadena Air Base in Okinawa, Japan on Oct. 5."

The piece also noted that, another American spy plane, this time an RC-135S Cobra Ball, left from Kadena Air Base "across the country's inland for the same purpose".

The timing of such worries and the launch of the aircraft could have been a response to failed U.S.-North Korea working-level talks. While the U.S. side expressed hopes for future talks and kept a positive tone despite there being no agreements made, North Korea seemed to consider the talks an outright failure. "The U.S. side maintained its former stand, seemingly showing that it has brought no new package, but repeated equivocal insistence that consecutive and intensive negotiations are necessary, yet not presenting any signs of calculation and guarantee," reads an official statement from the DPRK Ministry of Foreign Affairs.

"The U.S. is spreading a completely ungrounded story that both sides are open to meet after two weeks but as it has conceived nothing even after the passage of 99 days since the Panmunjom summit, it is not likely at all that it can produce a proposal commensurate to the expectations of the DPRK and to the concerns of the world in just fortnight.

We have no intention to hold such sickening negotiations as what happened this time before the U.S. takes a substantial step to make complete and irreversible withdrawal of the hostile policy toward the DPRK, a policy that threatens the security of the country and hampers the rights to existence and development of its people."