North Korea Has a Christmas Gift for President Trump: An ICBM Test 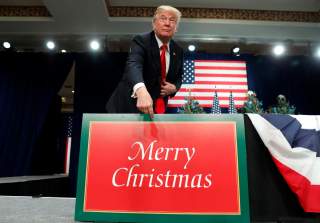 North Korea apparently is planning to resume testing of a nuclear-capable Intercontinental Ballistic Missile as a “Christmas surprise” for the United States.

A fresh test of an ICBM, the first since 2017, would signal a significant escalation of Pyongyang’s efforts to build up a nuclear arsenal capable of directly threatening the continental United States.

As a demonstration of goodwill toward Trump, North Korea halted ICBM testing following a successful trial flight in 2017.

But three summits between Trump and Kim, starting with a historic first meeting in Singapore in June 2018, failed to produce any sort of deal that satisfied America’s both goal of denuclearizing the Korean Peninsula and North Korea’s goal of legitimizing its new nuclear deterrent while also loosening international economic sanctions.

Talks stalled following a widely-publicized June 2019 handshake between Trump and Kim on the North Korean side of the demilitarized zone separating the two Koreas. Amid this impasse, North Korea's foreign ministry has openly insulted Trump, accusing him of lapsing into the "the dotage of a dotard." And in December 2019 Pyongyang began hinting at a Christmas surprise in the event diplomacy doesn’t get back on track.

“Brown declined to say whether the U.S. military has noticed an uptick of movement around North Korean launch sites or if it had any indications of what kind of missile could be used,” Defense News reported. “However, he noted that North Korea has already publicly acknowledged test activity at launch sites in recent days.”

One of those tests took place on Dec. 14, 2019, the state-owned Korean Central News Agency announced. That “crucial” test is a step toward "reliably restraining and overpowering the nuclear threat of the U.S.," Pak Jong Chon, chief of the general staff of the Korean People’s Army, told KCNA.

"In the situation of the acute confrontation, the U.S. and other hostile forces will spend the year-end in peace only when they hold off any words and deeds rattling us," Pak said.

As a new ICBM test possibly grows imminent, American diplomats are growing desperate. "Let me speak directly to our counterparts in North Korea," said Stephen Biegun, the U.S. special envoy for North Korea. "It is time for us to do our jobs. Let's get this done. We are here, and you know how to reach us."

Biegun conceded it’s been "a long year and we have not made nearly as much progress as we would have hoped."

Trump at one point staked his perhaps-undeserved reputation as a deal-maker on preventing a North Korean ICBM test. “North Korea just stated that it is in the final stages of developing a nuclear weapon capable of reaching parts of the U.S.,” Trump tweeted in January 2017. “It won't happen!”

But it did happen. Pyongyang conducted no fewer than three ICBM tests before voluntarily pausing trials. If North Korea does resume testing, it’s unclear exactly what this will mean for the country’s deterrent and the prospects of lasting peace.

“The possibilities are disturbing,” tweeted Jeffrey Lewis, a nuclear expert at the Middlebury Institute of International Studies at Monterey. “So, here's a thought! How about we remove some sanctions, persuade Kim to extend the moratorium on testing, and NOT FIND OUT?”