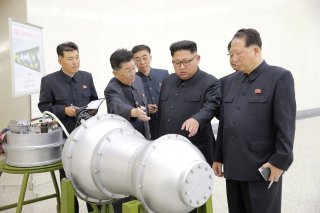 If there are three consistent themes North Korea has mastered since the country became a nuclear weapons power in 2006, it is that 1) the Kim dynasty treats its nuclear weapons deterrent as a crown jewel, 2) the North Koreans make mincemeat of the U.N. Security Council sanctions regime, and 3) North Korea will never give up anything for free.

All of which leads to the Security Council’s latest North Korea sanctions report. Some of the main excerpts have dribbled into the media over the last 24-48 hours.

In general, there isn’t much to get excited about. If you’re looking for anything surprising or notable from these nuggets, your eyes will likely be drawn to the report's reference about Pyongyang's possible miniaturization of nuclear warheads. Even that tidbit, however, is less shiny, new development and more dull, old news. Back in 2017, the U.S. Defense Intelligence Agency assessed that North Korea possessed the capability to produce nuclear weapons small enough to fit atop a ballistic missile. As reported by CNN at the time, some U.S. intelligence officials made the same conclusion a year prior. It is highly unlikely U.S. national security officials throughout the inter-agency therefore view the U.N. conclusion as anything other than a confirmation of what they already knew—indeed, the findings could very well have come from the U.S. intelligence community.

If you think this sounds bone-chilling, think again. Consider the reality: North Korea conducted its first underground nuclear test in October 2006 and has ordered five more in the years since. The U.N. might as well have written “the sky is blue” in big, bold, black lettering. U.S. intelligence community analysts are way past the point of being shocked or dismayed about North Korean leader Kim Jong-un proceeding with nuclear work. A continuation of the North’s nuclear development is likely built into the intelligence product.

Nor is it a mystery that North Korea’s sanctions-busting techniques continue to work like a charm. While Pyongyang’s exports to China dipped 81% during the first five months of the year, the North Koreans have spent the last 14 years of ever-tighter Security Council sanctions to devise unconventional and downright clever ways to circumvent the restrictions. Through cyber-hacking of foreign financial institutions, ship-to-ship transfers of coal and oil, exports of security equipment to African countries and the selling of fishing rights in its territorial waters, the Kim dynasty has managed to keep itself above water. And thanks to opposition from China and Russia, two nations that actually proposed a loosening of the U.N. sanctions regime late last year, Pyongyang can be somewhat confident that another round of Security Council sanctions is not on the horizon (if, however, Kim decides to break his long-range missile moratorium later this year, Beijing and Moscow may reconsider their generosity).

The tragicomedy of this whole situation is that these U.N. reports are often used as fuel for the next sanctions cycle. Those in Washington, D.C. who lean on sanctions as a crutch and remain infatuated with its supposed powers will read the Security Council’s latest monitoring document and conclude that the U.S. needs to adopt even stronger sanctions in response—unilaterally if need be. The fact that there is a much higher probability of U.S. troops withdrawing from South Korea than there is North Korea denuclearizing out of exhaustion with the sanctions is lazily explained away as defeatist.

It has become a cliche to say that Washington’s policy on North Korea needs a new approach. But in this case, the cliche is an astute observation.