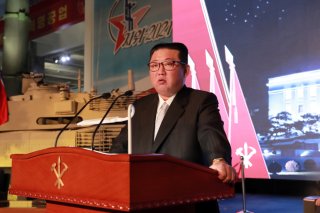 A Politburo meeting convened by North Korean leader Kim Jong-un on Thursday included the discussion of “countermeasures” to “hostile” U.S. policy, according to North Korean state media. Kim ordered officials to reconsider “trust-building measures” and “promptly examine the issue of restarting all temporarily-suspended activities," an apparent reference to the DPRK’s self-imposed moratorium on tests of nuclear weapons and long-range missiles.

A report on the meeting declared that "hostile policy and military threat by the U.S. have reached a danger line that can not be overlooked any more.” The report warned that North Korea must prepare for a “long-term confrontation” with the United States.

The Politburo meeting came just days after North Korea fired two tactical guided missiles in its fourth missile test this year. That test was preceded by the DPRK’s launch of two ballistic missiles from a train on January 14. North Korea also allegedly tested hypersonic missiles on January 5 and January 11. On January 11, American early warning systems initially suggested that the missile fired by North Korea could pose a threat to the Aleutian Islands or the coast of California. However, U.S. Northern Command and the Northern American Aerospace Defense Command (NORAD) later determined that American territories were not in danger from the test.

Rep. Gregory Meeks (D-NY), Chair of the House Foreign Affairs Committee, issued a statement on Wednesday condemning the DPRK’s recent flurry of launches. "I categorically condemn North Korea’s tests of two short-range ballistic missiles on Monday. This is the fourth in a series of ballistic missile launches that not only violate international law, but also destabilize the entire region,” Meeks stated.

Meeks added that although he supports a declaration to end the Korean War, “a declaration on its own is meaningless if North Korea is unwilling to engage in talks, is making no progress towards denuclearization, and is actively threatening and endangering U.S. allies and regional stability."

President Joe Biden’s two-hour press conference on Wednesday made no mention of North Korea. As reported by Reuters, a National Security Council spokesperson declined “to get into hypotheticals” over how the White House would respond if North Korea resumed nuclear weapons testing. However, the spokesperson reaffirmed that Washington’s goal remains the complete denuclearization of the Korean Peninsula. "We remain prepared to engage in serious and sustained diplomacy without preconditions to make tangible progress," the spokesperson added.