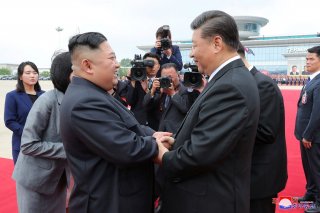 North Korea is sometimes described as China’s ‘junkyard dog’-- a militarist suzerainty that exists in part or in whole to enact the will of the Chinese Communist Party (CCP). It’s a tempting proposition, attractive for the elegant simplicity with which it answers one of the underlying questions surrounding North Korea (DPRK): namely, how the regime continues to survive in spite of its mounting economic and political weaknesses.

Nonetheless, the full extent of Chinese-North Korean relations paints a more complex picture than a simple story of one-sided control, revealing a surprising degree of interdependence in places where it may be least expected.

Since its inception in 1949, strategic ties between Pyongyang and Beijing have been subject to drastic swings. Mao Zedong’s intervention on behalf of the DPRK during the Korean War was followed by a China-backed coup attempt in 1956, instigated by a pro-China faction within the North Korean government seeking to depose Kim-Ill Sung. The 1960s marked a low point in the relationship, as Pyongyang broke with the CCP over the former’s ideological disapproval of the ongoing Cultural Revolution in China. This pattern of close ties followed by dramatic breaks repeated itself as recently as 2017, when China began ramping down trade relations with the DPRK out of pressure to comply with the international sanctions regime against North Korea. North Korean state media responded by criticizing the PRC on no uncertain terms, but relations between the two countries rebounded just as fast as they collapsed following a series of high profile face-to-face meetings between Kim Jong Un and Xi Jinping in the following years.

As a long-term trend, there is little question that North Korea has been, and continues to be, deeply dependent on China across a wide swathe of economic categories. The vast majority of Norea Korea’s export goods are shipped either to, or through, China. The bulk of DPRK’s foreign aid--especially food shipments to combat North Korea’s chronic shortages--comes from China, with South Korea and Russia being distant runners-up. Most important of all, China is by far North Korea’s biggest energy provider. Even after the latest round of international sanctions against North Korea’s energy imports, the US Energy Information Administration reports that DPRK has received around 10,000 barrels per day (B/D) of crude oil from China over the past few years.

To be sure, all this gives Beijing a significant degree of leverage over North Korea. But why is China investing so heavily into North Korea in the first place? Consider that the continued existence of a friendly North Korean state fulfills a number of key Chinese strategic goals. For one, the DPRK serves as a buffer between the PRC and a U.S.-aligned South Korea. More broadly, North Korea is a pro-Chinese counterweight in a region otherwise dominated by U.S. military allies during a time of unprecedented confrontation between the CCP and Washington.

The DPRK’s prospective collapse and absorption into a unified South Korea introduce the existential security threat of South Korean missile systems being deployed along China’s 880 mile-long border with North Korea. But there is an even more catastrophic scenario for Beijing: as unlikely as it seems, the CCP cannot fully discount that Kim Jong-un may opt to reconcile and militarily align with ROK and the west if he ever decides that his relationship with China has deteriorated past the point of no return.

There is little dispute that China holds the means to ruin North Korea economically, but it is no less the case that North Korea can ruin China geopolitically by weaponizing its regional buffer status against the CCP’s core security interests. By too easily relegating North Korea to the ranks of a hapless suzerainty, we risk obscuring the tangible and potentially powerful tools that Pyongyang has at its disposal to exert leverage over its Chinese partner.