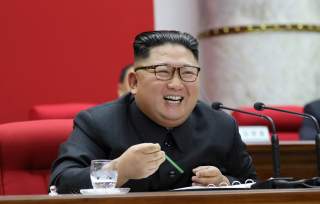 This time last year, North Korean leader Kim Jong-un had a warning for the United States: if you don’t start abiding by the June 2018 Singapore statement and begin to work towards a positive transformation in U.S.-DPRK relations, we will have to look elsewhere for our security. And indeed if that point is reached, Washington will have nobody to blame but itself.

In 2020, Kim decided to jettison his customary New Year’s Day speech in favor of a long, detailed statement after a four-day meeting of the Central Committee of the Workers’ Party. At the end of the session, the KCNA state news agency released a long summary of Kim’s remarks. From where the United States is sitting, none of it was particularly positive. If there were any doubts about the North Korean leader’s temperament with respect to the 18-month long diplomatic process, those doubts were lifted on January 1.

North Korea watchers are often taught to read beyond the lines for clues about the North’s thinking. But Kim’s remarks during the first day of the new year didn’t require much effort to decipher. The negativity ingrained in his comments at the plenary was as obvious as obvious can be. From the sound of things, the personal relationship between Kim and Donald Trump—the glue that held the bilateral dialogue together—is coming undone. In Kim’s mind, Washington is only looking out for itself; if the Trump administration is interested in maintaining a diplomatic channel with the North, it’s only to string things along so President Trump isn’t saddled with a foreign policy failure during this re-election campaign. In Kim’s version of events, the U.S. is engaging in “double-dealing behavior,” whispering sweet-nothings in Pyongyang’s ear while continuing to sell the most advanced combat aircraft to its rivals in the South.

For those North Koreans who were hoping for the day when formal diplomatic relations with the United States are announced and the full panoply of sanctions are lifted…well, that too is highly unlikely. Kim had a tough message for his people: don’t fool yourself and think rosy economic times are ahead. "The present situation warning of long confrontation with the U.S. urgently requires us to make it a fait accompli that we have to live under the sanctions by the hostile forces in the future,” KCNA reported the North Korean leader as saying. In translation: despite Trump’s public eagerness to change Washington’s relations with Pyongyang for the better, the export, import, manufacturing, and banking restrictions aren’t going anywhere.

Weeks before Kim’s long-winded speeches at the plenary, his U.N. Ambassador telegraphed North Korea's new strategic line: denuclearization is now off the negotiating table. The North Korean leader authoritatively confirmed his ambassador’s position, characteristically placing 100% of the blame for the present situation on Washington’s shoulders for not moving an inch towards improving the relationship.  U.S. sanctions are still on the books. The U.S. delegation at the United Nations is currently blocking Russia and China’s attempt at the Security Council to relax some of those export restrictions. And the U.S. military continues to conduct joint military exercises with those pesky, capitalist South Koreans—exercises "which its president personally promised to stop…” Why would the North continue to implement its own confidence-building measures when the United States is brazenly violating their own?

Kim’s language wasn’t all doom-and-gloom. For all his braggadocio about showing the world “a new strategic weapon” in the future, North Korea doesn’t want to close the door to diplomacy entirely. Kim could have stated unequivocally to the world that the Trump administration has strangled the life out of whatever dialogue process was left. Such a message would have been heard loud and clear around the world. But he didn’t go this route. Instead, Kim left the door slightly ajar while simultaneously throwing the ball back in Washington’s court. “[I]f the U.S. persists in its hostile policy towards the DPRK,” Kim said, "there will never be the denuclearization on the Korean peninsula and the DPRK will steadily develop necessary and prerequisite strategic weapons for the security of the state until the U.S. rolls back its hostile policy towards the DPRK and lasting and durable peace-keeping mechanism is built.” This type of rhetoric will come as a disappointment to U.S. officials who have been trying for nearly a year to get down to brass-tacks beyond the picture-taking and summitry. But to be completely honest, it could have been worse.

North Korea’s new way, it appears, is much like the old way: build up the strategic deterrent to the maximum extent possible; prepare for rough economic times ahead; keep China and Russia close in order to ensure just enough seepage in the sanctions regime to get by; and hope a bolt of lightning hits Washington, D.C. that finally convinces U.S. officials that military threats and ever stronger financial sanctions will only produce more resistance. Will the Trump administration get the message?