North Korea Knows that Donald Trump Is a Temporary Problem 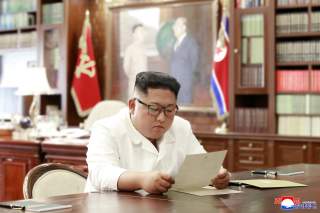 President Donald Trump has stepped back from conflict with Iran for the moment. He made a last-minute decision to abort airstrikes, which could have spiraled into a large conflict between America and Iran. Other opponents of the United States, especially small, rogue ones, are closely watching this new development.

Since 2017, the president has significantly raised tensions with at least four such “rogue states”: Iran, North Korea, Venezuela and Syria. These crises have played out so similarly that there is practically a Trump crisis playbook. Pattern emergence is risky for a president who values unpredictability; opponents increasingly know what to expect.

A Trump war-crisis has the following emergent elements:

1. A difficult relationship is dramatically elevated into a major international crisis.

In all four cases, there was no imminent threat of war from the U.S. opponent. Relations were chilly, even hostile, but there was no extraordinary threat of these states attacking the United States or its allies. Even in the Iran case, its actions against U.S. allies in the Middle East have been mostly asymmetric and harassment rather than clear military threats.

Trump then inflames the situation with dramatic threats of conflict, sanctions, or even national destruction. Threats of intervention lead to major media coverage and the perception of a crisis or countdown to kinetic action.

2. There are outsized demands on opponents.

Once a crisis begins with round-the-clock news coverage, the president puts forth extraordinary demands that almost guarantee intransigence from the rogue target. For example, the Trump administration expected North Korea to completely, verifiably, and irreversibly denuclearize. It had the same requirements for Iran. As for Venezuela, the administration pressured its leader to flee the country. Such demands naturally inflame a nationalist backlash and make diplomacy much harder—because the United States appears to be requiring abject surrender in return for nothing.

3. Splits emerge between Trump and his hawkish advisors.

Trump ran as a more dovish Republican than his opponents. It is now quite clear that Trump does not want to launch a major war during his term. He likely worries about suffering the fate of George W. Bush and the Iraq conflict. Yet Trump has curiously surrounded himself with fairly orthodox GOP hawks like H. R. McMaster or John Bolton. This has created crisis run-ups in which Trump uses provocative language, seemingly to goad the other side into striking first, coupled with conflicting language of diplomacy and summitry. The well-known chaos of the Trump White House is reflected in mixed messaging and confusion about what, if any, U.S. red lines there are.

4. Trump’s ultimate demurral on the use of force.

For all of Trump’s over-the-top rhetoric—he would “totally destroy North Korea” and “obliterate Iran”—Trump is obviously gun-shy. At this point, after four crises inflamed by Trump on Twitter with such boastful threats, it is clear that the president is bluffing. Trump’s method seems to be to lead the opponent to the brink with extreme threats in hopes they will blink and offer concessions for nothing. The more obvious way to extract concessions from a target would be to offer counter-concessions, but for ideological reasons, this is hard for GOP presidents. Trump is left only with threats. But he now faces an obvious credibility problem: after threatening extreme force on four separate occasions but only launching one pinprick strike—in Syria in 2017—will future opponents believe Trump’s war threats?

All nation-states will learn from this. If Trump earns a reputation as a bluffer, then China may hold to a firmer line in the trade war. But rogue states will benefit the most. They are now most likely to be targeted by U.S. force. Since the Cold War, the United States has regularly attacked small states like Yugoslavia, Libya, and Iraq. They will now probably assume that Trump does not want to fight, and that they need only dig in their heels and wait for Trump’s targets on Twitter to change.

This lesson applies most obviously to North Korea. Syria and Venezuela are already internally vulnerable due to deep domestic divisions, and Iran still lacks a nuclear weapon. North Korea faces neither vulnerability. Thus, it has more room to bargain hard with the United States. U.S. threats of force were a useful card for the U.S. side. In retrospect, it now appears that China and North Korea both genuinely feared Trump’s 2017 war-threats. Now they will not. North Korean leader Kim Jong-un can simply wait for Trump, or the next president, to offer better terms.

It is to Trump’s credit that he is more dovish than the hold-over neocons who still populate GOP foreign-policy circles. But in deploying unused threats of force so frequently, everyone now thinks Trump is a bluffer not a fighter. We should expect the next state Trump threatens to ignore him. That, in turn, could push Trump to use force just to prove himself, as Bush 43 did in Iraq because he feared being labelled a wimp as his father was.

The obvious answer is to shift to multilateralism, diplomacy, international organizations, regional partnerships, and so on to negotiate outcomes with these opponents and their patrons. But given the GOP’s hostility to working within such frameworks, Trump is left with just one tool—unilateral threats (of force or “maximum pressure” sanctions). And herein lies the GOP and Trump’s contemporary foreign-policy dilemma: both remain enamored of American exceptionalism, posturing bluster, unilateralism, extraordinary concessions tantamount to unconditional surrender, and regime change. Yet post-Iraq, they no longer have the will to follow through with the violence such methods require if the opponent does not fold, because the American public does not want Vietnam/Iraq-style conflicts anymore. So, Trump is left in the curious position of talking like a belligerent neocon but acting like a retrenching dove. And increasingly rogue states everywhere can see this.