North Korea Most Certainly Has a Coronavirus Problem 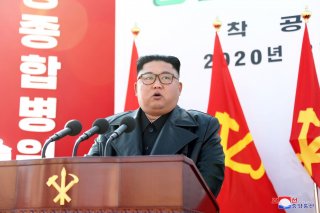 North Korean state media has publicly admitted the likely presence of coronavirus in the country, reversing Pyongyang’s longstanding and widely doubted claim of no coronavirus cases within its borders. But the details remain murky: just how widespread is the infection, and what has the government been doing to curb it? Here is everything we know about North Korea’s ongoing coronavirus response.

Chinese authorities formally notified the World Health Organization on January four that forty-four of its citizens had been infected by “pneumonia of unknown cause.” There is some indication that Pyongyang, which shares a 880 mile-long border with China, took a handful of preventative measures in the following weeks. These included banning foreign (mainly Chinese) tourists, restricting the travel rights of diplomats on North Korean soil, and curtailing certain trade activities and joint enterprises with China. Still, North Korea’s subsequent insistence on having zero coronavirus patients strains belief in light of the extensive economic, military, and cultural ties that Pyongyang has cultivated with Beijing for the past sixty years.

Over the last several months, experts and U.S. intelligence sources have recurrently dismissed the possibility that North Korea is coronavirus-free. Moreover, these suspicions were amplified by prior reporting suggesting regional outbreaks in North Korea’s northeastern provinces bordering China and Russia, as well as allegations that as many as 200 North Korean soldiers died from the coronavirus by early March. As Hong Min, a researcher at Seoul’s Institute for National Unification, told AP News, “though a really extensive local outbreak might not have occurred yet, it’s likely that a considerable number of people have been infected.” Nevertheless, it is worth underlining that most of these reports are anonymously sourced; the insulated nature of the regime makes outside corroboration exceedingly difficult, if not impossible.

North Korean state media confirmed its first likely coronavirus case on July 26. The patient, identified only as “Kim,” was a redefector who fled to South Korea three years ago, only to escape back to the North after allegedly being charged with sexual assault by South Korean authorities. The announcement was followed by a wide range of new quarantine measures, including stay-at-home orders and freshly-built isolation wards for suspected patients. North Korea’s armed forces also have reportedly redoubled their efforts to enforce their ongoing shutdown of the Chinese-North Korean border with the deployment of 1,500 special forces troops to the northern Ryanggang province. Finally, the government is conducting a mass-mobilization effort—dubbed the “all-people’s campaign”—to promote mask usage and other sanitary practices aimed at curbing the spread of the virus.

Pyongyang’s newfound sense of urgency raises numerous questions. The circumstances surrounding Kim’s story are particularly muddled, as both the World Health Organization and South Korean say that there is no evidence Kim had ever tested positive for the coronavirus. These developments raise the possibility that Pyongyang, which has a long history of using redefectors as props for domestic political purposes, is exploiting Kim’s redefection as a chance to admit the presence of coronavirus whilst blaming it on outside forces.

If, as it increasingly appears, parts of North Korea are indeed on the cusp of a coronavirus outbreak, it remains to be seen if the North Korea’s decrepit medical system and chronic lack of even basic medical supplies—let alone specialized equipment like ventilators and test kits—can marshal the resources required to effectively contain the spread.