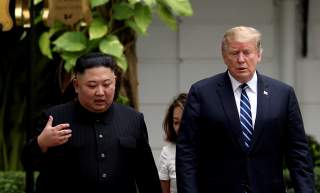 Fifty years ago this month, a North Korean fighter jet shot down a U.S. spy plane over the Sea of Japan, killing all thirty-one airmen onboard. The so-called EC-121 Incident caught the United States by surprise, leaving the Nixon administration scrambling to consider a range of possible responses in the hours and days that followed—including the threat of nuclear retaliation. In the event, however, the United States opted to exercise restraint, with President Richard Nixon authorizing only a show of naval force to register American outrage.

The crisis came a low point in U.S.-North Korean relations. The previous year, North Korea had seized the USS Pueblo in waters just beyond Pyongyang’s territorial limit. One seaman was killed in the attack and eighty-two sailors were captured, tortured, and held prisoner in North Korea until December 1968, just four months before the EC-121 shootdown. On that occasion, too, U.S. leaders—in this case, President Lyndon Johnson and his advisers—erred against military reprisals, instead preferring a diplomatic approach to resolve the hostage situation.

Why did the United States not punish North Korea for the capture of the USS Pueblo and the subsequent downing of the EC-121 spy plane? And why had North Korea felt emboldened enough to commit such reckless acts of hostility in the first place?

The answer, in short, is that both Johnson and Nixon judged the potential risks of retaliating against Pyongyang to vastly outweigh any expected benefits in terms of changing North Korean behavior. Not only did North Korea have enough conventional military power to unleash devastating war on South Korea (Pyongyang’s own version of “massive retaliation”), but the United States also had to be cognizant of how North Korea’s nuclear-armed neighbors, China and the Soviet Union, would react to a military strike on a fellow communist power.

This basic geopolitical calculation—that North Korea, if pushed, might escalate any militarized crisis into an intolerably costly conflagration—still helps to explain the limits of U.S. influence over North Korea. So long as North Korea possesses nuclear and conventional military capabilities to obliterate South Korea, its regime is impervious to coercive diplomacy. At least, that seems to be the assessment in Pyongyang.

The historical record speaks for itself. Since the EC-121 shootdown  incident and the capture of the USS Pueblo, North Korea has repeatedly shown itself capable of deplorable behavior, whether through lethal attacks across the demilitarized zone, cold-blooded assassinations and other terrorist attacks, or the abduction of hundreds of Japanese citizens and thousands of South Koreans. As recently as 2010, North Korea torpedoed a South Korean naval vessel (killing forty-six) and shelled the border island of Yeonpyeong (killing four). And these acts of foreign aggression are in addition to the terror that North Korea inflicts upon its citizenry on a daily basis.

Throughout it all, U.S. leaders have viewed North Korea as a dangerous pariah state. But since 1953, the accepted wisdom has been patient, grudging restraint towards Pyongyang is the right and proper response. Such counsel persuaded Richard Nixon to avoid using military force in response to the EC-121 shootdown incident and every president since to refrain from using America’s superior military power to cow North Korea into submission even as, between 1966 and 1980, a total of eighty-nine U.S. soldiers were killed in clashes on or adjacent to the Korean Peninsula.

While there is surely some breaking point at which American leaders would decide to use military force against North Korea, that point has never been reached since the armistice to end the Korean War, despite the litany of transgressions listed above. Indeed, now that North Korea has developed its own independent nuclear arsenal (and so does not have to rely upon extended nuclear deterrence provided by its allies), the bar for U.S. military action against North Korea is probably even higher than it was during the Cold War.

Given all this, can North Korea ever be convinced to temper its foreign policies and abide by a common international rulebook? Will it ever be a “normal” state?

The answer, unfortunately, might well be no. At least, it is difficult to understand how and why a volte face in North Korean behavior might come about. For the reality is that North Korea has existed in an effective state of anomie for several decades. Three successive supreme leaders have learned from experience that they can flout the most basic rules of international society with relative impunity. It will be a tall order indeed to convince such a regime that, all of a sudden, its national security can be best ensured through moderating its behavior.

Even if Pyongyang appears to make concessions as part of nuclear negotiations with President Trump, it would be remiss to discount the possibility of recidivism. Old habits die hard—especially when they mostly go unpunished for decades. Nobody should expect North Korea to give up its “Daredevil Doctrine” any time soon. It was only last month that Chairman Kim threatened to restart nuclear tests. If bilateral talks take a turn for the worse, then more egregious acts of international misconduct would not be out of character.

But even if Kim Jong-un might see no reason to deviate from the operational code laid down by his grandfather and father, North Korea’s tradition of taking foreign-policy gambles will only pay off so long as the United States continues to conclude that the risks of escalation on the Korean Peninsula outweigh the expected benefits of military action. With Donald J. Trump in the White House, this can no longer be taken for granted.

This is the dangerous reality of contemporary U.S.-North Korean relations that was on full display in August 2017 but has, at least temporarily, been masked by the ongoing talks over Pyongyang’s nuclear program: North Korea has not changed. The country is run by a regime that operates according to a longstanding political calculus that violent international behavior will go unpunished—but the United States has changed, from being led by mostly risk-averse leaders to being led by a president who trumpets his unpredictability and willingness to use force.

If a crisis along the lines of the EC-121 Incident were to happen today, then who knows what America’s response would be? Perhaps the best that can be hoped for is that we never have to find out.