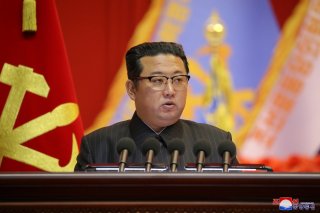 On Monday, the United States and several American allies issued a statement that asked North Korea to stop missile tests and called for a return to diplomatic dialogue. Hours later, North Korea launched another missile.

According to the Yonhap News Agency, the statement was issued by the United States, Albania, Britain, France, Ireland, and Japan. The statement came after North Korea fired a missile off its eastern coast last week in its first missile launch of the year. North Korea described the missile as “hypersonic,” although that has not been independently verified.

“We stand today unified in our condemnation of the DPRK's most recent missile launch, which the Security Council will discuss shortly," said the statement, which was delivered ahead of a meeting of the U.N. Security Council. The statement went on to call North Korea’s continued pursuit of weapons of mass destruction “a threat to international peace and security.”

But just hours after the statement, North Korea launched another missile, once again off its eastern coast. According to the Associated Press, the single ballistic missile in the Tuesday launch flew 700 kilometers at Mach 10 speed.

South Korea also declared the launch a violation of past U.N. resolutions and described it as having demonstrated “a more advanced capability” than missiles that have been launched by North Korea in the past. South Korea had initially implied that North Korea was exaggerating its capabilities following last week’s launch.

Japanese prime minister Fumio Kishida also condemned the latest launch, calling it “extremely regrettable that North Korea has continued to fire” missiles immediately after being condemned by the international community.

Meanwhile, Nikkei Asia reported this week about signs that Kim Jong-un is pursuing a “new ideology” after being in power for ten years. It remains unclear what exactly the specifics of the ideological framework are, or what it will be called, although some have referred to it as “Kim Jong-un Revolutionary Thought.”

Kim recently delivered a speech to mark the new year in which he discussed the nation’s "great life-and-death struggle" with pandemic-era economic troubles. The speech, in which Kim also vowed to strengthen the country’s military, came just days before the first of the two missile tests.

Last week, per the AP, North Korea announced that it would not be sending a delegation to compete in the upcoming Olympics, although the International Olympic Committee had already banned North Korea from participating.