North Korea Remains the Land of Bad Options: What to Do About Human Rights? 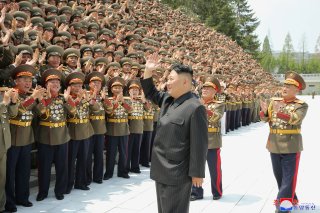 Pyongyang responded that Quintana’s “reckless remarks” were “not a mere nonsense of an individual with a topsy-turvy insight but a scheme worked out at the urging of the United States.” The [North] Korea Association for Human Rights Studies, through its unnamed spokesman, opined that “the ‘special rapporteur,’ not being content with distorting our reality, has pointed a finger at our ‘people’s livelihood’ and viciously picked on the most realistic and appropriate anti-epidemic measures taken by our state for our own specific need in order to cope with the global epidemic.”

Quintana highlighted the impact of North Korea’s unique form of national quarantine—no other nation has issued shoot-to-kill orders for its border police. He issued a detailed report and spoke to the General Assembly’s Third Committee last month.

“The Democratic People’s Republic of Korea has never been more isolated from the international community than at this point in time,” Quintana said. “This is having a dramatic impact on the human rights of the people inside of the country, and dampens hopes of achieving sustainable peace and security on the Korean Peninsula. I today urge the Government of the Democratic People’s Republic of Korea, the international community and its individual members to reverse this trajectory by reviving the spirit of multilateral cooperation that enabled the foundation of the United Nations in the first place.”

His statement recognized the North’s underlying human rights problem as well as the negative impact of measures taken to combat the pandemic. Although the UN typically has been reluctant to criticize its members, the human rights failings of the Democratic People’s Republic of Korea have been so grievous that many governments agreed to make an exception. In 2014 the UN Human Rights Council issued a harsh assessment of the DPRK: a 36-page report backed by 372 pages of findings. At that point, everything was on the table. “Among the violations to be investigated were those pertaining to the right to food, those associated with prison camps, torture and inhuman treatment, arbitrary detention, discrimination, freedom of expression, the right to life, freedom of movement, and enforced disappearances, including in the form of abductions of nationals of other states,” according to the assessment.

Quintana’s latest report is notable for its emphasis on the well-being of the North Korean people.

“Even prior to the pandemic, over 40 per cent of people were food insecure, with many suffering from malnutrition and stunted growth,” the report stated. “The country’s health infrastructure suffers from underinvestment, with critical shortages of essential medical supplies, and the absence of equipment and adequately trained staff. The lack of access to clean and safe water, sanitation and hygiene services at home, schools and in hospitals also underpins many health and nutrition issues.”

Ultimately, the DPRK bears the brunt of the blame for the situation since the regime has implemented the sort of central economic planning which has failed around the world. There is a reason why countries with socialist systems so often seem to suffer from repeated “inclement weather” upon which malnutrition and even starvation are typically blamed. Also, resulting from “the weather” is insufficient investment in health care.

Having an inadequate medical system is a major reason the regime fought the pandemic with its usual tools of force and repression. While that helped prevent the pervasive spread of the coronavirus in the DPRK isolation has reduced incomes of and international aid for the Korean people.

“The draconian steps the Government of the DPR Korea has taken to prevent Covid-19 from entering reportedly include a policy of shooting individuals who attempt to enter or leave the country,” Quintana observed. “Increased restrictions on freedom of movement and the shutting of national borders has chocked market activity that has become essential for people’s access to basic necessities, including food. The food situation is a priority concern. President Kim Jong Un himself acknowledged the dire food situation earlier this year. The most vulnerable members of the population, including children and the elderly and persons in detention, face the risk of starvation. The lifesaving humanitarian work of the United Nations and other international actors has also ground to a halt, with no United Nations international staff currently in the country.”

Pyongyang is embarrassed by both judgments. Indeed, it is hard to know which charge is worse from the regime’s viewpoint—that North Korea’s health care system is inadequate or that North Korea’s policies are harming people’s health. “The people of the DPR Korea should not have to choose between the fear of hunger and the fear of Covid-19,” Quintana noted. Additionally, he criticized both regime policies and international sanctions. Although Pyongyang has routinely denounced Western economic restrictions. Such rules have provided a political boost of sorts for Kim Jong-un. “Prioritizing pressure has further isolated the Democratic People’s Republic of Korea and had humanitarian and human rights consequences,” Quintana said. “It is by no means certain that the country will emerge from this isolation as the world emerges from Covid-19. If steps are not taken now, the country’s extreme isolation could crystalize and become the new norm.”

Indeed, it is important not to underestimate Kim’s undoubtedly calculated embrace of isolation. He previously initiated modest economic reforms and undertook international diplomacy with aplomb. However, he has since reversed the former and abandoned the latter. Indeed, his government now exhibits fear of outside contact, especially with South Korea, increasing penalties of those caught listening to outside music and programs, including teens.

Quintana urged Western policy to respond. “This is the time to send clear signals, take concrete action and find creative ways to give momentum to the stalled diplomatic process for securing a peaceful resolution to the conflict,” he told members of the United Nations. Although it would then be up to the DPRK to engage, he doesn’t want the West to give Kim any excuse to maintain isolation.

And, as is appropriate for someone tasked with confronting the human-rights issue, he concluded with a strong affirmation of that mission:

“I would like to highlight that adopting a determined approach to engagement does not require the neglect of human rights violations, including the issues I have highlighted in my final report to the General Assembly before you: kwanliso (political prison camps), the worst forms of child labor, oppression of exercise of freedom of religion and access to information,” Quintana said. “Some of the most serious human rights violations also qualify as crimes against humanity. These crimes are likely ongoing, epitomized by the continued operation of large political prison camps. In this report, I reiterate that the existence of kwanliso (political prison camps) represents the worst excesses of a system of governance that systematically violates the human rights of its people.”

Human rights and peace are both required on the Korean Peninsula. This is a mission to which the Biden administration should do all that it can. Without genuine peace, human rights are unlikely to improve. Without Pyongyang willing to improve the status of its own people, a stable peace also is problematic. The challenge is finding policies to advance both.