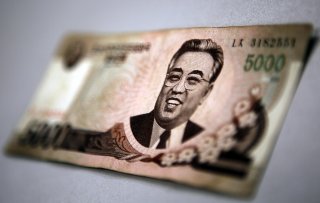 That’s according to NK News, which described the appearance of the coupons as “in a 5,000-won denomination, printed with red ink on white paper.”

Asia Press had reported recently that the regime has had trouble printing banknotes and that “North Korea’s financial woes have worsened, with state agencies and state-run companies running out of cash and unable to pay for goods or salaries.”

The coupons first appeared in the countryside before showing up in the capital city of Pyongyang later on, according to news reports.

“Although rumours began to spread in mid-September that ‘Tongpyo’ was circulating in and around Pyongyang, I didn't see it in person until early October,” a source inside the country told Asia Press. “Then, as companies and factories began to make payments and settlements using ‘Tongpyo,’ it appeared in the market. However, merchants are wary and try not to accept them. Even though the government says, it is the same as regular money, who would believe them? We’ve been fooled too many times before. I’d rather barter.”

There have been reports going back to August that North Korea had been using the coupons in lieu of cash, possibly because ink and paper are no longer being imported from China, according to the NK News said.

“This might look like North Korea has just run out of ink and paper, but at a time when the economy is believed to be in great difficulties and household purchasing power is depressed, the need to print new won in such a form is probably a consequence of the closure of the border and aggressive government moves to curtail the use of forex on domestic markets that have driven up demand for won notes,” Peter Ward, a North Korea economy expert, told NK News.

“If they are not careful they might overshoot in their money printing and start driving up inflation again like the country last witnessed from 2001-13.”

Much like in the United States and other parts of the world, the pandemic has led to inflation in North Korea, with shortages emerging of certain products. North Korea’s regime has been claiming all along, including in reports to the World Health Organization, that it has had zero cases of the virus, although few observers of the country or health experts believe that to be true.

NK News had reported about a year ago that North Korea had introduced strict currency exchange restrictions for foreigners, who were limited to only $100 a day per person.