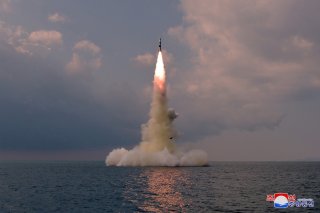 South Korea said Wednesday that North Korea has launched a ballistic missile, its first launch of that kind of the year, and the first since October.

According to the New York Times, the missile was launched off of North Korea’s east coast, and South Korean and U.S. officials are studying its trajectory. The launch, which landed in the water, was swiftly condemned by government officials from South Korea and Japan.

“It’s truly regrettable that North Korea has repeatedly launched missiles since last year ,” Prime Minister Fumio Kishida of Japan said, per the Times. “The Japanese government will strengthen warning and surveillance more than ever.”

The State Department also condemned the launch. And according to Pacific Daily News in Guam, the Offices of Guam Homeland Security and Civil Defense announced Wednesday that there was no threat to that U.S. territory from Wednesday’s launch by North Korea.

A few days before the launch, per the Associated Press, North Korean leader Kim Jong-un had delivered an address at the conference of the Workers' Party in which he laid out such priorities for the new year as bolstering the country’s military capability, fighting the coronavirus, and improve North Korea’s economy.

“The increasingly unstable military environment on the Korean Peninsula and international politics have instigated calls to vigorously push forward with our national defense build-up plans without any delay,” Kim said in the speech, according to Korean state media, as cited by the AP. The speech did not mention the United States.

"North Korea is signaling that neither the Omicron variant nor domestic food shortages will stop its aggressive missile development,” Leif-Eric Easley, a professor at Ewha University in Seoul, told CNN of the Wednesday launch.

The missile appears to be another short-range missile, as were most of the ones that have launched in the last year. Last October, the North Korean regime claimed to have launched a submarine-launched ballistic missile (SLBM), one of several projectiles launched by North Korea in 2021. It’s part of a pattern, experts have said, in which North Korea launches missiles during the early days of new presidential administrations in the U.S. or South Korea.

This followed the collapse of the diplomatic process begun during the Trump administration, which included a pair of summits in 2018 and 2019. That process did not lead to any type of agreement. Once the Biden administration took over, it launched a review of North Korea policy which, per Reuters last May, will entail “pressuring North Korea to give up nuclear weapons and ballistic missiles that will explore diplomacy but not seek a grand bargain.”