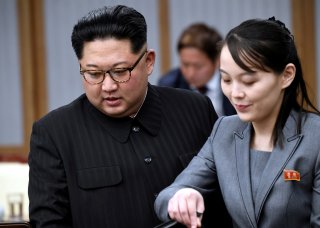 The Kim regime is no longer playing nice with South Korea. In fact, North Korean officials aren’t even pretending anymore to be interested in furthering a dialogue.

Analysts and reporters covering the reclusive dynasty are naturally trained to read between the lines of a North Korean policy statement or a comment published by the state flagship Korean Central News Agency. This is for good reason; the prickly North can be very caustic with their remarks. It’s tempting for those monitoring the North to get swept away with all of the slime and venom pumped out by the North Korean propaganda machine on a daily basis and chalk all of it up to a kind of disturbing lunacy. The Kim regime, however, isn’t crazy—nor is the man at the top of the system. If anything, Kim Jong-un—with his funny haircut and penchant to eliminate all sources of discontent or prospective competition—is brutally rational.

North Korea’s statements as of late have taken on a different tone. Gone are the days when Pyongyang would trash Seoul and Washington for being irreconcilable while at the same time leaving a small window open for more discussions in the future. It’s all fire and brimstone now. Kim Yo-jong is comparing North Korean defectors in the South to “mongrel dogs” and ordering the North Korean high command to prepare for additional retaliation against Seoul. 2020 is quickly turning out to be the exact opposite of 2018, the year when South Korean President Moon Jae-in, U.S. President Donald Trump, and Kim smiled at each other like long-lost friends.

The downward spiral was a long time coming. If 2018 was the year of the blossoming flower, 2019 was the year when the flower started losing some of its petals. The entire diplomatic process Trump gambled on at considerable risk to his political and personal capital (his former national security advisers opposed his first summit with Kim) largely lost momentum immediately after the 2019 summit in Hanoi, when Kim and Trump both walked away disappointed and empty-handed. Working-level talks have been…well…hardly working at all. The last time U.S. and North Korean officials met face-to-face was October 2019, when the two sides couldn’t even agree on how the interaction went. The entire episode smells like one, big, missed opportunity by two countries—the United States and North Korea—who are too closed-minded in their positions and too unshakeable in their ways.

The biggest loser in all of this is President Moon, a former peace activist, presidential adviser, and long-time believer in the virtues of inter-Korean rapprochement whose own peace initiative with the North may have already reached the point of death. One can easily envision an uncensured Moon expressing his frustration at the lack of progress in inter-Korean relations over the previous year—due to in part to his own idealism, Kim’s stubbornness, and Washington’s inability to separate the peace track with the denuclearization track. We could be days away from watching the joint inter-Korean liaison office demolished by the North, an act that would be perfect symbolism to the end of whatever Moon hoped to accomplish on the peace front during his tenure.

In 2018, Moon was delivering grand speeches about the Korean Peninsula undergoing a historic transformation. Now, he and his advisers are begging the North Koreans to come to their senses and not to escalate the situation.

Unfortunately for Seoul, it appears Kim Jong-un is setting a course that will end in the rollback the very Panmunjom and Pyongyang declarations that Moon Jae-in banked his entire presidency on.