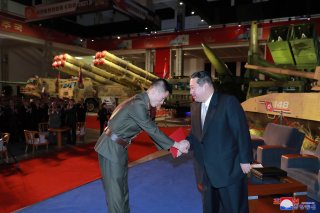 North Korean leader Kim Jong-un vowed to build an “invincible” military in a speech delivered at a rare defense exhibition.

Flanked on both sides by weapons of mass destruction, Kim Jong-un rehashed North Korea’s well-trodden repertoire of grievances against Washington and Seoul. “There is no basis in their actions for believing that it is not hostile,” said Kim, in response to the Biden administration’s repeated assurances that it harbors no hostile intent toward Pyongyang. “The U.S. is continuing to create tensions in the region with its wrong judgments and actions,” he added, calling the United States a source of continued instability on the Korean Peninsula. But Kim’s harshest words were reserved for South Korea, accusing Seoul of harboring “illogical” and “gangster-like” attitudes and warning that the DPRK will “respond with strong action and not condone” the South’s intent to “harm” North-Korea’s right to self-defense. Kim denounced Seoul’s characterization of DPRK’s ongoing nuclear tests as “provocations,”  countering that “dangerous” joint U.S.-South Korean exercises are driving North Korea’s ongoing effort to build up its military capabilities.

“I say once again that South Korea isn’t the one that our military forces have to fight against,” Kim said. “Surely, we aren’t strengthening our defense capability because of South Korea. We shouldn’t repeat a horrible history of compatriots using force against each other.” Kim reiterated his intent to carry out the sweeping military modernization plans outlined at the January 2021 Party Congress, including new solid-fueled ICBMs and a new strategic submarine. It appears that no new weapons were unveiled at Self Defense 2021, which also included an air show portion and assorted feats of strength performed by shirtless North Korean soldiers.

Kim’s messaging centered on the charge of hypocrisy, accusing his southern counterparts of building up their military whilst disputing the DPRK’s right to do the same. The speech, then, served as an impassioned defense of North Korea’s nuclear deterrent, justifying to the world why the DPRK possesses these weapons and is actively seeking to acquire more of them.

North Korean state media outlet KCNA reported late last month that the DPRK had successfully launched a new hypersonic missile, allegedly dubbed the “Hwasong-8.” The test was reportedly deemed a failure by a South Korean intelligence assessment that concluded the Hwasong-8 did not reach the Mach 5 threshold for hypersonic speed and is still in an early development stage. That launch came on the heels of tests involving long-range cruise missile launches, described by DRPK sources as a “strategic weapon of great significance,” earlier in September.

The DPRK’s flurry of missile tests follows the familiar cycle of intense saber-rattling, loosely interspersed with vain diplomatic overtures, that has come to characterize relations between the two Koreas in recent months.