North Korea Starts the New Year With a Missile Test 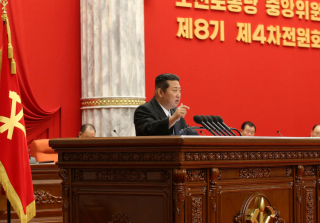 North Korea has tested another missile, the first in two months. Pyongyang claimed that it was hypersonic, which the United States and South Korea could not confirm.

The missile, whatever its nature, was short-range, flying just 310 miles. The launch was the 62nd of Kim Jong-un’s ten-year reign, maintaining a much faster pace than his father and grandfather. However, the immediate international reaction was the verbal equivalent of a multilateral yawn.

The U.S. Indo-Pacific Command declared that the test “highlights the destabilizing impact of the DPRK’s illicit weapons program,” while allowing that “we have assessed that this event does not pose an immediate threat to U.S. personnel or territory, or to our allies.” The State Department tried to sound a bit tougher: “This launch is in violation of multiple U.N. Security Council Resolutions and poses a threat to the DPRK’s neighbors and the international community.” However, State Department spokesman Ned Price stated that the Biden administration was still committed to negotiation.

Japanese Prime Minister Fumio Kishida said that he found “it truly regrettable that North Korea has continued to fire missiles since last year.” The South Korean government expressed “concern,” but viewed the test as yet another reason to negotiate. “We should not give up the hope for dialogue in order to fundamentally overcome this situation,” insisted President Moon Jae-in just two months before his successor is elected. He continued: “If both Koreas work together and build trust, peace would be achieved one day.”

China, believed to be keeping the North afloat with shipments of food and oil as the latter has isolated itself in response to the Covid-19 pandemic, essentially dismissed the launch. Foreign ministry spokesman Wang Wenbin declared that “all parties concerned should keep in mind the big picture [and] be cautious with their words and actions.” He urged continued dialogue to settle issues involving the peninsula.

Finally, UN spokesman Stephane Dujarric said the secretary-general believed that Pyongyang “should resume talks with the other parties concerned and that diplomatic engagement and diplomatic talks remain the only pathway to sustainable peace and complete verifiable denuclearization of the Korean Peninsula.” That is, shall we say, unlikely at the moment.

Not that anyone should be surprised. The fabled “international community” is quick to opine on North Korean activities but has little means to influence Pyongyang’s behavior. The abundant verbiage after the latest test will have no impact on the North.

Indeed, the launch appears to be a practical foot stomp to Kim’s continued commitment to the ambitious military development objectives that he set forth last fall. The Workers’ Party of Korea just finished a five-day plenum that was largely focused on domestic issues, especially lagging food production. However, Kim told the assembled cadre: “The military environment of the Korean peninsula and the trend of the international situation getting unstable day after day demand that bolstering the state defense capability be further powerfully propelled without a moment's delay.” Which helps explain the latest launch. And presages many more ahead. This leaves negotiations with the DPRK dead in the water.

Divining Kim’s intentions is impossible, but his direction is ominous. He has largely sealed his nation off from the world, most obviously to prevent the North from being overwhelmed by Covid-19. However, he also has reversed direction on economic reform, reasserting state authority over agriculture and industry. This better allows him to both chart an autarkic course and resist foreign influences, especially from South Korea. He may have made a permanent policy change, moving back toward the dismal worlds of his father and grandfather, who accepted domestic poverty and dependence on China to secure their control and their dynasty’s survival.

At the same time, he is moving forward with weapons development without providing a typically ever-eager South Korea and more reluctant America an opportunity to make an offer to freeze his efforts. He may have a certain quality and/or quantity objective he hopes to meet, after which he will return to the negotiating table, but no one knows. So far the DPRK has demonstrated an impressive ability to arm itself even when its people are starving.

If he chooses a very large number before reaching out, the price also is likely to be quite high. For instance, the Rand Corporation and Asan Institute forecast that North Korea could have enough nuclear material for 200 nuclear weapons, as well as hundreds of missiles, by 2027. Perhaps Kim has no set point in mind and simply intends to move ahead and look for a favorable moment to open negotiations.

Pyongyang is likely to remain beyond the influence let alone control of its closest great power friends, China and Russia. The former matters most, but its relations with the DPRK have oscillated wildly over the years. The Kim dynasty has always gone its own way, even when the result was mass starvation. Worst from Beijing’s standpoint would be a violent collapse, with the potential for mass refugee flows and loose nuclear weapons, followed by reunification and an expanded U.S. military presence on the peninsula. The PRC would not find the latter to be an attractive prospect even in the best of times. And the present certainly is not the best of times for Sino-American relations.

The ROK is unlikely to have much influence on the North irrespective of who wins the March presidential election. Once Moon demonstrated his inability to deliver serious economic benefits to the North, the latter treated him with contempt when it bothered to acknowledge him. The opposition, if victorious, likely would take a tougher stand, but that wouldn’t matter much either. For it would not be able to ratchet up sanctions, which is apparently Kim’s major concern. And Moon already has increased military outlays.

Tokyo also has little means to influence the North’s behavior. Although Japan has a large ethnic Korean population, relations with both Koreas remain tainted by Tokyo’s colonial rule. Efforts open a relationship foundered over Japan’s demand for an accounting of its citizens kidnapped decades ago by North Korean intelligence. Tokyo’s improved defense efforts might help deter any strikes by Pyongyang but will also be used to justify additional DPRK military development.

Which leaves America. The Biden administration appears not to expect to engage the North. Already almost a year has passed with no response from Pyongyang to Washington’s entreaties. In his plenum address, Kim did not even mention the United States and paid more attention to school uniforms than foreign policy.

Nor does the administration have much time to devote to the issue. The president’s domestic agenda is in shambles, and he is preparing for midterm elections that will likely cost his party control of the House and perhaps the Senate as well. He currently faces two foreign near-crises—Russia and Iran. And China is likely to be a persistent challenge, from trade to Taiwan and everything in between. It is hard to imagine any serious push to negotiate with the DPRK.