North Korea Starts the New Year With a Threatened Bang 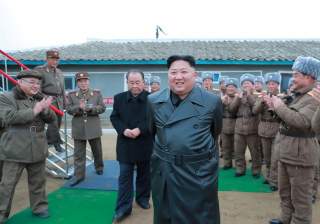 No, North Korea didn’t launch an ICBM on December 25, as predicted by some observers disturbed by its recent hints about a “Christmas present” for the U.S. But we shouldn’t breathe a sigh of relief just yet. Pyongyang, after all, marked the culmination of its highly anticipated end-of-year deadline with a strident threat to demonstrate a new “promising strategic weapon system.”

Kim Jong-un announced that he no longer felt bound by his promise to President Trump to not conduct nuclear or ICBM tests. Instead, North Korea indicated it would “shift to a shocking actual action to make [the U.S.] pay for the [sanctions] pains sustained by our people.”

After a four-day Korea Workers’ Party plenum meeting, North Korea left the door to negotiations open the tiniest of cracks, with the “scope and depth” of its nuclear and missile deterrent contingent on a dramatically altered U.S. policy. But the regime’s demands, including an end to military exercises and weapons sales to South Korea, have been unacceptable to the United States. The regime dismissed Washington’s calls for dialogue as stalling tactics and indicated it would seize the initiative rather than waiting for the situation to improve.

Pyongyang will continue to go up the escalation ladder, either incrementally or immediately, but in a manner to maximize impact and diplomatic leverage. The regime could first conduct tests of medium- and intermediate-range missiles before an ICBM or nuclear test. Missile experts speculate whether North Korea may test a newly developed ICBM, possibly solid-fueled.

North Korea’s party plenum report underscored that U.S. and international sanctions have been “harsh and dangerous” challenges to the country’s economy. But the regime vowed never to “barter the security and dignity of the state,” depicting the situation as a “stand-off between self-reliance and sanctions.”

Secretary of State Michael Pompeo reacted cautiously to North Korea’s latest missive, expressing hope that the regime won’t take provocative actions. Pompeo did indicate for the first time that Trump had promised to cancel large-scale allied military exercises in return for Kim’s promise to refrain from nuclear and ICBM tests — a poor deal, given that North Korea is prohibited by 11 UN resolutions from conducting nuclear or any missile launch regardless of range.

If Kim carries out his threat to launch an ICBM, it will deal a devastating blow to the Trump Administration’s claims of success with North Korea. After the 2018 Singapore summit, President Trump proclaimed that the “North Korean nuclear threat is over” and Pyongyang is “denuking all over the place.”

Trump also touted his relationship with Kim as the greatest foreign policy accomplishment of his administration. Pompeo has repeatedly claimed that Kim agreed to abandon its nuclear and missile arsenals in a complete, verifiable, irreversible manner as required by UN resolutions.

In December, President Trump downplayed the potential for provocative North Korean behavior, claiming Kim “does not want to void his special relationship with the President of the United States or interfere with the U.S. presidential election in November.” Trump responded to the North Korean plenum statement by emphasizing he has a good relationship and “Kim will keep his word.”

In actuality, North Korea hasn’t taken any actions to denuclearize, rejected the U.S. depiction of progress, and continued to build missiles and nuclear weapons. During 2019, North Korea launched 26 missiles, the highest number of violations of UN resolutions ever conducted by the regime in any year and unveiling five new weapons systems that threaten South Korea, Japan, and U.S. forces stationed there.

The Trump Administration must chart a course between the twin flaws of over-reacting and under-reacting to a North Korean ICBM test. The U.S. should not return to the “fire and fury” rhetoric nor initiate an attack on North Korea for crossing a technological threshold, since that would risk precipitating a full-scale war with a nuclear nation, leading to massive casualties. The Administration should also reject calls for relaxing sanctions in return for only a partial, flawed agreement.

The U.S. should end its policy of repeated concessions to North Korea. The Administration’s “maximum pressure” policy has never been maximum. Since the Singapore summit, President Trump has constrained the enforcement of U.S. laws, weakened allied deterrence capability, embraced a purveyor of crimes against humanity, and overlooked numerous North Korean violations of U.N. resolutions.

Instead, the Trump Administration should ratchet up pressure on North Korea and foreign enablers of its prohibited nuclear and missile programs. Washington must implement a comprehensive strategy of military deterrence, containment, pressure, law enforcement, and confrontation of North Korean human rights violations.

The North Korean nuclear threat is far from “over,” but taking these steps could help the Administration make concrete progress toward that goal.

Bruce Klingner is a senior research fellow for Northeast Asia in the Asian Studies Center at The Heritage Foundation.