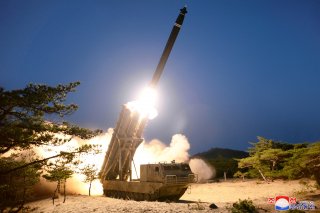 On Tuesday, April 14, North Korea tested an as-of-yet unclear number of surface-to-surface cruise missiles. These missiles were launched by North Korean Army units and from fighter jets. The timing of these tests was significant since South Koreans went to the polls for their legislative elections on Wednesday, April 15.

Pyongyang has been known to lash out during important events, such as South Korean elections, in order to intimidate Seoul and remind the world that North Korea exists. Moreover, North Korea tends to follow a yearly pattern. Shea Cotton, a research associate at the James Martin Center for Nonproliferation Studies at Middlebury, created a North Korea Missile Test Database at the Nuclear Threat Initiative. He explained in a Defense News article that, “Individual tests might not be possible to predict, but on the whole, North Korea’s testing activities follow a somewhat regular pattern, with tests beginning in late February or early March and then proceeding through mid-September before dropping off for the year.”

In addition, April 15 is North Korean founder Kim Il-sung’s birthday. Pyongyang often marks that important holiday by conducting tests or holding large military parades. Kim Il-sung was the grandfather of current leader Kim Jong-un. Revered through propaganda and a cult of personality, Kim Il-sung’s birthday is known as “The Day of the Sun.” It is arguably North Korea’s most important holiday and is used to venerate the Kim family.

Needless to say, South Koreans were not intimidated and have lived under North Korea’s threats for decades. If anything, Pyongyang may just be trying to distract North Koreans from its own coronavirus problems while getting the attention it needs to restart negotiations on sanctions relief. Regardless of the exact reason, do not be surprised if Kim tests more missiles soon.