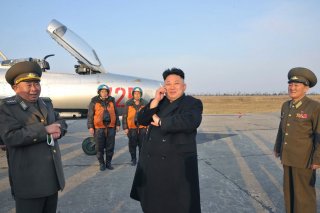 How bad is the coronavirus pandemic in North Korea? If you believe the regime, per a report last month by the Center For Strategic and International Studies, the country has completely contained the pandemic, although no one seems to believe them.

Various indications suggest that the virus has arrived in North Korea, if it hadn’t before. The World Health Organization says 3,373 North Korean nationals were added to the “suspected” patients lists in the first three weeks of October, with that number reaching over 5,000 by the end of October. One expert, Jean Lee of the Korea Center at the Woodrow Wilson Center, told The National Interest earlier this month that even though the country practices tough border controls, “it’s hard to believe there were no cases, given the long border North Korea shares with China.”

Also, schools have not yet opened in the country in the fall, with teachers in some cases teaching students at their homes.

The CDC, while stating that the coronavirus risk in North Korea is “unknown,” nevertheless recommends that travelers “avoid all nonessential international travel to North Korea.”

Now, a new report says that North Korea is attempting to stop the spread of the virus in an unconventional way: By discouraging smoking.

According to an NK News report this week, North Korean state media has “warned that smoking tobacco could increase a person’s risk of getting the virus.” The warning came from North Korea’s Korean Central News Agency (KCNA.)

It follows an edict issued by North Korea’s Supreme People’s Assembly a week earlier encouraging its people to stop smoking and banning smoking in public. This drew international mockery, largely because North Korean leader Kim Jong-un is frequently seen smoking in public, as did his father and grandfather when they were the leaders of the country. During the period earlier this year when it was rumored that Kim had died or was otherwise in poor health, his smoking and labored breathing were often cited as reasons for concern.

North Korea has long been a country where smoking is prevalent. In 2016, a study was conducted, looking at the “smoking habits and nicotine dependence of North Korean male defectors.” It found that of 272 men who had defected from North Korea to South Korea, “84.2% were current smokers, 12.5% were ex-smokers, and 3.3% were non-smokers.”

The CDC has said that “being a current or former cigarette smoker increases your risk of severe illness from COVID-19.” Experts have also said that second-hand smoking, including from vaping, can spread the coronavirus, even further than normal breath.

The regime has in the past, per NK News, warned that "migratory birds, snow and yellow dust from China” could potentially spread coronavirus.