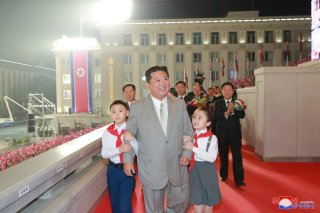 North Korea has announced that it will build a memorial stone for the country’s founder, Kim Il-Sung, in Beijing, China. The stone is built on a farm in Beijing, Yonhap News Service reported, citing the state-run Korean Central News Agency (KCNA).

Ri Ryong-nam, the North Korean ambassador to China, attended the unveiling ceremony for the stone, as did Lin Songtian, who leads the Chinese People's Association for Friendship with Foreign Countries.

The arrival of the stone comes at a time when North Korea has strengthened ties with the likes of Russia and China. A recent Foreign Policy analysis states that the Kim regime “has abandoned any rapprochement with Washington.”

“The message congratulated the CPLA on winning the victory of the revolution, safeguarding the sovereignty and territorial integrity of the state, and making excellent achievements in the struggle for building a modernized army under the leadership of the Communist Party of China with Xi Jinping as its core for the past ninety-five years,” KCNA reported in August.

“Noting that the armies of the DPRK and the PRC, which fought shoulder to shoulder in the anti-Japanese and anti-U.S. wars, are reliably guaranteeing the cause of socialism with arms, the message stressed that the Korean People's Army would closely wage strategic and tactic coordinated operations with the CPLA in order to jointly guard peace and stability in the Korean peninsula and the rest of the world.”

Also this week, North Korea carried out the latest in a series of missile launches, firing a missile over Japan for the first time in five years, as reported by CNN. The rocket landed in the Pacific Ocean, and CNN described it as “a highly provocative and reckless act that marks a significant escalation in its weapons testing program.”

“This is a missile that North Korea started testing in 2017 … So it’s not really a new missile,” Jeffrey Lewis, director of the East Asia Nonproliferation Program at CNS, told CNN. “North Korea has a bunch of missiles that are shorter range, and that wouldn’t go over Japan–but they have a small number of missiles that could make that journey.”