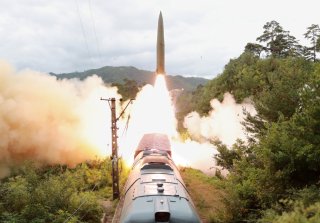 The state-run Korean Central News Agency (KCNA) stated on Tuesday that the country tested “tactical guided missiles,” noting that the projectiles hit their “precise target” in the East Sea. "The test-fire was aimed to selectively evaluate tactical guided missiles being produced and deployed and to verify the accuracy of the weapon system," the KCNA added.

The DPRK’s most recent test came just two days after Pyongyang launched a pair of tactical guided missiles from railway cars. North Korean state media said the test was aimed at “checking and judging the proficiency” of the DPRK’s combat procedures. These launches come shortly on the heels of tests of purported hypersonic missiles on January 5 and January 11.

The Biden administration imposed its first sanctions over the DPRK’s weapons programs last week, targeting five North Koreans connected to the country’s efforts to develop ballistic missiles. North Korea condemned the sanctions, threatening a retaliatory response in an earlier statement. "If the U.S. adopts such a confrontational stance, the DPRK will be forced to take a stronger and certain reaction to it,” said a North Korean Foreign Ministry spokesman on Friday.

Du Hyeogn Cha, an analyst at Seoul’s Asan Institute for Policy Studies, said North Korea’s latest crop of tests is partly intended to signal that Pyongyang will flout further U.S. sanctions. “Externally, North Korea is trying to make a statement that it will continue to go its own way regardless of sanctions. Internally, the leadership is trying to tell its people that the supreme leader’s promises will be realized no matter what, whether they be weapons development or overcoming sanctions through a self-reliant economy,” Cha said, according to ABC News. Cha added that the fast pace of the tests reveals “a sense of alarm within Pyongyang’s leadership” over the need to “get something done with the United States in 2022.”

Nam Sung-wook, a North Korea expert at Seoul’s Korea University, said the tests are deliberately timed for political effect. With a South Korean election scheduled for March and President Joe Biden’s party wading into a fraught midterm election in November, North Korea could be looking to ramp up the pressure on Washington and Seoul. “In Pyongyang’s mind, there is no other way to grab Washington’s attention than a major provocation,” added Nam.