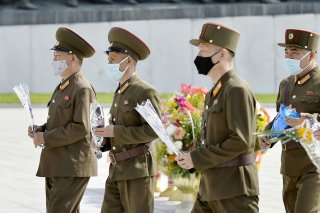 In the United States, coronavirus shut down most live theaters back in mid-March. Broadway theaters all went dark on March 12, while most regional theaters have also since closed and not reopened.

However, it appears theaters have reopened- in North Korea. According to the Korea Herald, which cited a photo released by the state-run Korean Central News Agency (KCNA), Pyongyang Circus Theatre “showed several performances” on Korean Mother’s Day, which is Nov. 16.

The performances, per the reports and the photo supplied, were “socially distanced,” in the sense that every other seat was left empty. This follows reports that North Korea, in October, had staged a mass gymnastics performance to mark the seventy-fifth anniversary of the Workers’ Party of Korea, in which it did not appear that social-distancing measures were observed.

The Workers’ Party of Korea event is said to have led to a coronavirus spike in North Korea, which has caused problems at a school in that country. According to one report, teachers have been teaching students in their homes, in the country.

North Korea has been said to be carrying out various coronavirus mitigation measures, even as the country officially denies that it is dealing with coronavirus at all. North Korean state media recently issued the medically questionable warning that smoking can spread coronavirus, even though smoking is prevalent in the country, and North Korean leader Kim Jong-un is often shown smoking publicly, as his father and grandfather also did when they led North Korea.

Kim did not appear in public for nearly a month, although he resurfaced in recent days, to appear at a Politburo meeting, where he discussed the ongoing coronavirus threat, as well as “anti-socialist” sentiment in the country’s education system.

Kim, per the reports, emphasized “the need to keep a high alert, build a tight blocking wall and further intensify the anti-epidemic work, being aware of the important responsibility for the security of the state and the well-being of the people.” He also discussed “COVID-19 and the state anti-epidemic situation and clarified the tasks for the Party, military and economic fields to further tighten the emergency anti-epidemic front.”

Speaking of North Korea’s efforts to combat the coronavirus pandemic, another recent report said that hackers from Russia and North Korea are seeking to hack into the systems of vaccine makers and other entities producing drugs related to coronavirus, in several countries, including Canada, France, India, South Korea and the United States. The author of the report, an expert with Microsoft, said some of the breaches have been successful, although it's not clear how much damage has been done.