North Korea's Contradictions Will Be Its Demise 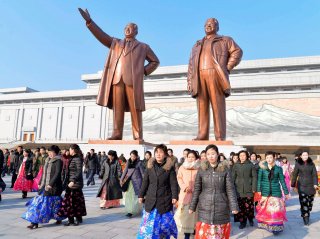 The Korean War began in June 1950 at a time when North Korea enjoyed enormous economic advantages over the South. Its economy was developing far more rapidly than South Korea’s, and countries across Eastern Europe and East Asia were falling to Communism “like dominos.” China was communized in October 1949, only eight months prior. Moreover, the United States appeared ready to abandon South Korea by leaving the country out of its “defense perimeter.” It seemed only a matter of time before the southern tip of the Korean peninsula would also be swept by advancing communism.

All this gave Kim Il-Sung the confidence, as well as the sense of urgency, to launch his invasion. Even when it failed, Kim was able to frame the resulting stalemate as a victory and propagate the Juche ideology, envisaging a future in which the Korean people, under his leadership, would remain self-reliant in the face of foreign powers.

Since then, history has progressed in a radically different direction. South Korea has made the remarkable transformation from a war-torn authoritarian regime of its own into an advanced democracy. The Soviet Union no longer exists. China has prospered only because it unabashedly adopted a free-market economy; in fact, it has now become South Korea’s biggest export market. The U.S.-South Korean alliance has become one of the strongest and most enduring alliances in history, leading the United States to extol it as the “linchpin of peace, security, and prosperity in the Indo-Pacific region.” North Korea’s ideology of Juche—self-reliance and autarky—is starkly out of place in the age of globalization.

Today, North Korea is not only the most oppressive, secretive, and isolated regime in the world, but the most anachronistic. Every single pillar that had sustained the North Korean regime is gone. The only way to sustain the regime now is through oppression and isolation, which only deepens its inherent contradictions. It has resorted to the development of a nuclear arsenal in a desperate attempt at self-preservation. China, its only erstwhile “ally” and patron, continues to support North Korea only because it too is becoming increasingly anachronistic.

The starkest irony is that, in addition to nuclear weapons, the North Korean regime is increasingly turning to cyberwarfare to sustain itself. Cyberwarfare has become the “tailor-made instrument of power for North Korea” because it enables the regime to skirt sanctions to extract desperately needed hard currency and goods. The regime is also deploying extensive digital surveillance and censorship technologies to tighten its control on its people. The technology that has come to symbolize and embody interconnectivity is, ironically, being used to sustain the most isolated regime in the world.

Can North Korea even last until 2025? Perhaps. The regime has defied predictions of its imminent demise for decades. However, a regime so riven with contradictions, so anachronistic, cannot long survive. The ongoing coronavirus pandemic is yet another ironic, but stark, proof that Juche is outdated. The writing is on the wall.

Jeenho Hahm is a Doctor of International Affairs candidate at Johns Hopkins University’s School of Advanced International Studies (SAIS) with a research focus on North Korea’s cyber strategy. He earned his Master of Public Administration from Columbia University’s School of International and Public Affairs (SIPA) where he also worked as a consultant to the government of Estonia, a research assistant for the Columbia-Harvard China and the World Program (CWP), and a news writer for the school’s official communications. He previously served as an officer in the United States Air Force.