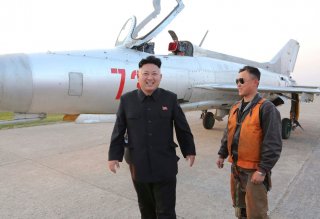 North Korean leader Kim Jong-un recently made his first public appearance in some time, and North Korea watchers are abuzz over what appears to be the dictator’s recent weight loss.

According to NK News, some of those who follow North Korea made note of Kim looking slimmer during his recent reemergence. While no one knows exactly what happened, watchers see some significance in weight loss. NK News even noticed that Kim appears to be wearing his wristwatch tighter than he did in photographs in state media that appeared just last November.

It “likely improves his position at home” if Kim lost the weight in order to get healthy, Vipin Narang, an associate professor of political science at the Massachusetts Institute of Technology (MIT), told NK News. “In turn [this] provides more predictability perhaps for regional actors like Japan, the ROK and the U.S. who may have greater confidence that he will be running the show.”

However, it’s another story altogether if Kim has lost weight due to a serious health condition, as such an event would likely set off a succession battle and potential chaos within the North Korean regime. For a lengthy period in the spring of 2020, Kim did not appear in public, amid widespread rumors around the world that he was ailing or even dead. Kim eventually appeared in public again, dispelling the rumors.

“It may be a simple matter of a healthy lifestyle change or a more complex issue,” Mike Brodka, an intelligence officer for U.S. Special Operations Command in South Korea, told NK News. “Right now, we do not know, but it raises enough serious questions that we must pay attention to events over the next couple of months to find out.”

Kim Jong-un, perhaps needless to say, does not publicly release his medical records. But he has been overweight for virtually his entire time in the public eye, and both his father and grandfather, his predecessors as ruler of North Korea, are believed to have died of heart attacks.

In early 2018, Stephen Colbert joked on his late night show that Oprah Winfrey could calm tensions that were taking place at the time by helping the North Korean leader lose weight. And former President Donald Trump, prior to his diplomatic opening with North Korea, taunted Kim about his height and weight in late 2017.

“Why would Kim Jong-un insult me by calling me 'old,' when I would NEVER call him 'short and fat’?,” the then-president tweeted in November of 2017 while visiting Hanoi, the same city that would host a summit between the two men in 2019.