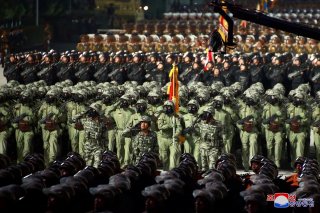 One of the dumbest strategies during the Cold War was withholding diplomatic relations for political purposes from disfavored regimes. Washington paid a high price for not talking with the People’s Republic of China for decades. Had the two been in contact in late 1950, perhaps the U.S. could have forestalled Chinese intervention in the Korean War.

Diplomatic relations actually are more important the more dangerous the regime. Frankly, American diplomats could simply phone the authorities in, say, Norway or New Zealand or Uruguay if an issue arose. Who needs an ambassador in those nations? It would be much more useful to have diplomats sitting in Pyongyang in contact with the North Korean foreign ministry.

Nevertheless, Kim presented his message. It was simple: don’t ignore me. It is not in America’s interest to put the Democratic People’s Republic of Korea on the backburner. For it will be a different DPRK by the time Washington moves forward on Korean issues again.

To call the North unique is forever an understatement. One of its unique abilities is staging largescale propaganda events. The mass games are infamous. The parades, along streets filled with enthusiastic bystanders, are equally impressive though in a different way.

In this case on October 10 the regime put on quite a show. Gaining most attention was a new ICBM, which presumably could reach the U.S. and carry MIRVs, or multiple reentry vehicles, that could hit multiple targets with nuclear payloads. Although a crowd-pleaser that collected the “best of show” prize, it is not a sure winner. Its biggest flaw is that it is liquid-fueled, which leaves it more vulnerable to preemptive attack. Harry Kazianis, Senior Director of the Korea Studies at the Center for the National Interest, wondered if it “was never meant to be a deployable military asset in the first place, but a technological demonstrator.” Nevertheless, whatever its eventual efficacy, it is an impressive example of DPRK technical expertise.

There were other important missile developments. Numerous short- and medium-range missiles and a new SLBM, or submarine-launched ballistic missile. A new, bigger transporter, erector, and launcher, or TEL, for the monster ICBM. Additional, possibly domestically-produced TELs for smaller missiles. Overall, increased numbers of missiles and TELs probably ensure the ability to overwhelm any attempt at missile defense by the U.S. or other states.

Equally impressive were the North’s apparent conventional upgrades: new anti-air defense system and missiles, main battle tank, anti-tank missiles, armored personnel carriers, and small arms. Of course, it is impossible to know whether all are widely operational and effective. However, in aggregate they represent a significant improvement in the Korean People’s Army’s fighting ability.

This mailed fist was displayed in a velvet glove, however. The large ICBM has not been flight-tested. Moreover, Kim was remarkably pacific in his remarks, admitting his failure to deliver promised economic growth and insisting that “we are not strengthening our war deterrence against anyone specific.” He also offered “warm regards to the Southern brethren” and said he looked forward to when “the North and the South will hold hands together.”

A U.S. government official called the military developments “disappointing,” criticizing the DPRK for “continuing to prioritize its prohibited nuclear and ballistic missile program.” No matter how disappointing, however, this approach was entirely predictable. When has Pyongyang waited patiently without enhancing its military? Especially when Washington seems to be failing to treat the North’s desire to negotiate seriously.

Kim’s message was multi-part and unmistakable, which Washington can ill afford to ignore. Rather, the next administration should respond once the present political madness has passed.

1.     Sanctions will not stop North Korea from investing in its military. By whatever means, including sanctions evasion, illicit commerce through China, and domestic investment squeezed from the civilian economy, Kim’s government will find the resources to improve everything from its nuclear deterrent against America to its ability to wage conventional war against U.S. and South Korean forces on the peninsula.

2.     So far Kim has been patient, not breaching his promise not to test nuclear weapons or long-range missiles. Presumably he did not want to cause Trump trouble before the election and is content to wait for the results. Once the identity of the next president is known, however, all bets will be off. The failed Hanoi summit is fast approaching its third anniversary. In his message Kim expressed frustration over the regime’s economic failures. He’s ready to deal.

3.     Washington’s failure to make a serious disarmament offer will not redound to America’s and the Republic of Korea’s benefit. Kim will risk the administration’s “disappointment” to strengthen his negotiating position when engagement resumes, as it eventually will. The George W. Bush and Obama administrations learned this lesson. Now the Trump administration will do so, as will the potential Biden administration.

4.     Although Pyongyang might accept the inevitability of delay if Joe Biden emerges victorious, it is unlikely to exhibit much “strategic patience,” especially given the performance of the last administration of which Biden was a member. Even if Kim eschews provocation, he will move ahead on weapons development. And the regime certainly won’t wait if a Biden administration decides to first address Iran, China, and other global hotspots.

5.     The next move up the escalatory ladder is obvious and presumably ready: flight test the new missile. In a briefing organized by NKNews academic and analyst Andrei Lankov noted that every DPRK operator and general dreams about seeing such a missile fly. Continued allied intransigence would give Kim a good reason to let them fulfill their fantasies and move forward.

6.     Every ICBM improvement increases the risk to the American homeland. And thereby makes both the alliance and the ROK’s security less certain. Once the North develops the capability of destroying major U.S. cities even a conventional conflict on the peninsula would risk going nuclear. Which would increase pressure on any president to disengage from South Korea’s defense.

7.     Lest the incoming president consider the idea of preventative military strikes, the North’s numerous mid-range missiles offer a reminder of the North’s capability of hitting American forces in Guam, South Korea, and Japan, as well as major population centers in the latter two allied states. Moreover, the new conventional equipment displayed would likely help the KPA slow the inevitable allied victory in conventional combat that could be triggered by allied attack.

8.     Washington’s fabled objective of CVID, comprehensive, verifiable, irreversible denuclearization, is long out of reach. Now the price of even a more modest deal has increased. The U.S. shouldn’t expect to make an agreement based on its conditions, emphasized Lankov. Realistically, any result will be arms control rather than denuclearization. At the start that probably means formalizing a testing halt and freeze on nuclear developments. Hanoi might be a good starting point.

9.     China likely has retrogressed significantly from its tougher sanctions enforcement of 2017. Despite the Kim regime’s evident heavy military investment, the North’s civilian economy has not collapsed. Fuel prices, one of the most important economic indicators, have not spiked. This almost certainly reflects Beijing’s support. It also is unclear whether China sold the North additional logging trucks, which were reworked into TELs, or if Pyongyang managed to produce them domestically. So long as U.S.-Chinese relations remain hostile and Pyongyang avoids provoking a violent American response, Beijing is unlikely to clamp down.

10.  Kim again demonstrated a worldly nature that raises hopes for serious if difficult negotiations. The parade sharply increased pressure on the U.S. without breaking any commitments and embarrassing Trump, which could have triggered a dangerous response. A potential President Biden also could not miss the message.

11.  Moreover, to view the parade Kim dressed in a suit, not knock-off Mao outfit, acknowledged his regime’s failure, while blaming circumstances beyond his control, and showed emotion in discussing hardships afflicting his people. Lankov called the DPRK dictator “a good actor” who “is a politician.” Although Kim won’t sacrifice his power, he would prefer to improve the living standards of his people. Of course, this also gives the U.S. leverage, since he is more interested in sanctions relief than was his father.

12.  The interregnum after the election would be a good moment to reestablish (for Trump) or establish (for Biden) contact with Kim. The North will be holding its 8th Korean Workers’ Party congress in January. The prospect of engagement would encourage him to present a more positive message and avoid making any provocative gestures to gain Washington’s attention.

Dealing with North Korea once brought to mind Winston Churchill’s famous description of the Soviet Union: “a riddle, wrapped in a mystery, inside an enigma.” The Hermit Kingdom no longer is quite so mysterious. The regime remains a bizarre outlier, a Marxist-Leninist monarchy, a communist regime without communist symbols, and a dynastic rather than personality cult. Rather like Voltaire called Prussia an army that had a country, North Korea is a nuclear arsenal with a country attached.