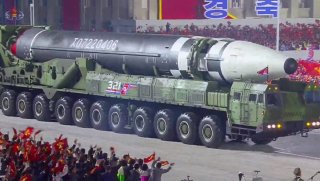 A recent report by Daily NK, a news outlet specializing in North Korea, notes that North Korean authorities are satisfied with the degree of warhead miniaturization progress achieved on the latest ICBM unveiled at North Korea’s October 10 military parade. But the extent of that progress is far more limited than previously anticipated: the new ICBM only carries two warheads that must be launched in the same trajectory. If accurate, this means that North Korean ICBM’s currently do not possess the capability to deliver multiple warheads on separate targets— for instance, two or three major American cities— at the same time.

Daily NK posits that the lack of MIRV capability is why Pyongyang opted not to introduce the recently unveiled ICBM as the “Hwasong-16,” instead branding it as an advanced entry in the current Hwasong-15 series.

It should be noted that Daily NK relies on one unnamed source, making further corroboration important. At the moment, The National Interest cannot independently confirm this report.

Markus Garlauskas, a Nonresident Senior Fellow at the Atlantic Council and recent TNI author, brought several details from the report into question. “The main elements of this report ring true, but some of the details are questionable. The missile is liquid-fueled and is likely capable of carrying multiple re-entry vehicles that are not independently targetable. I agree that a flight test of the new missile is being prepared for after the US election, but that the timing could change on short notice. However, I question some of the details, such as why North Korea would display two obviously different missiles in the same parade and call them both Hwasong-15,” Garlauskas told The National Interest.

The report sheds some further light on the new ICBM’s specifications. According to Daily NK’s source, this advanced Hwasong-15 variant will feature a maximum range of up to 15,000 km, a marked improvement over the current Hwasong 15’s 13,000 km. The source notes a substantial size difference, allowing for potentially enhanced performance: “The [new ICBM] has a larger diameter and is longer than the Hwasong-15, which means that it can carry more warheads and has additional auxiliary engines.”

The report corroborates the overwhelming expert consensus that North Korea’s recently-unveiled ICBM is liquid-fueled, adding that Pyongyang is in the process of “making solid-fuel rocket engines more robust.” This invites the speculation that Pyongyang is saving the vaunted “Hwasong-16” designation for a new, solid-fueled ICBM. In a previous analysis from the parade, The National Interest identified the lack of solid-fuel technology as a major technical shortcoming of North Korea’s new ICBM. Transitioning to solid-fueled, land-based ICBM’s would provide a major boon to the survivability and second-strike potential of North Korea’s strategic arsenal, though it is unclear how far along Pyongyang is in this process.

North Korea’s re-entry vehicles have previously encountered significant reliability issues, a problem that, according to NK Daily’s source, Pyongyang is planning to remedy with upcoming atmosphere reentry tests: “The authorities are preparing a test of the new ICBM for early next year.” This would conform to North Korea’s general pattern of saving major nuclear provocations until shortly after new U.S. presidents are sworn in, though, as the source clarifies, the timing for these tests can change at a moment’s notice.