North Korea's Olympic Team Was Banned From the Beijing Olympics 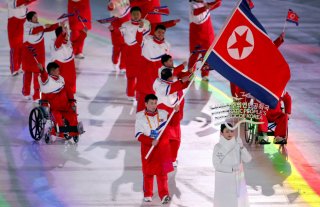 The 2022 Winter Olympics are underway in Beijing, China, and ninety-one nations are taking part in the games. But North Korea, an ally of Beijing that even borders China, isn’t represented in Beijing. Why hasn’t North Korea fielded a team at the current Olympics?

According to NBC News, the International Olympic Committee barred North Korea from competing in the games after North Korea refused to send a team to the Summer Olympics in Tokyo last year. That banishment still allowed individual athletes from North Korea to compete.

However, North Korea announced in January via state media that they would not be sending any athletes or other dignitaries to Beijing. The United States, late last year, announced that it was staging a diplomatic boycott of the Summer Games, which did not impact the participation of U.S. athletes. In 1980, the U.S. boycotted the Olympics in Moscow in response to the Soviet invasion of Afghanistan, while the Eastern Bloc retaliated by boycotting the 1984 Olympics in Los Angeles.

“We could not take part in the Olympics due to the hostile forces’ moves and the worldwide pandemic,” North Korea said in a letter, per the Korean Central News Agency (KCNA).

North Korea sent athletes to the 2018 Winter Olympics in South Korea, with the two Koreas’ Olympic teams even walking together in the opening ceremonies and combining forces for a women’s hockey team. But that won’t be the case this year. In fact, North Korea has not participated in any international sports competitions since the start of the pandemic.

The decision comes as North Korea has carried out a series of missile launches and appears to have moved away from the diplomatic process of the Trump years.

However, according to Al Jazeera, North Korean leader Kim Jong-un did congratulate China on the start of the games.

“The successful opening of the Beijing Winter Olympics despite the worldwide health crisis and unprecedented severe circumstances is another great victory won by socialist China,” Kim said in a note of congratulations to Chinese president Xi Jinping. Kim also vowed to “steadily develop the relations between the two parties and the two countries to a new high stage.”

Although North Korea has enforced strict border closures with China since the start of the pandemic, it continues to claim that it has had no COVID-19 cases.

Ties between the countries “have been cemented into invincible strategic relations that can never be broken by anything in the struggle for defending and advancing the common cause,” Kim said in the letter.