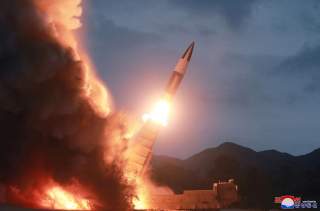 On August 10, North Korea conducted its sixth missile test as the United States and South Korea began their long-planned, yet much scaled-down, joint military exercises. In response to the drills, Pyongyang has also made itself clear that it would be compelled to “seek a new road” if Washington and South Korea were to continue to “sharpen a sword” against the regime.

But the truth is North Korea has already been paving its “new road” for quite some time now. Despite the tightening sanctions imposed on the regime since 2017, intended to suffocate its weapons of mass destruction programs, it continues to surprise the world with even more sophisticated weapons.

Disregarding all the growing concerns among the international community, U.S. President Donald Trump has continually downplayed the recent missile launches. He stated that short-range missiles are not nuclear and “very standard”—i.e., something that many other countries test as well. While some might concur with this underestimation just because they are not nuclear, what those weapons are actually capable of should intimidate analysts and policymakers a bit more. In a nutshell, they could make South Korean defense systems obsolete.

On May 4 this year, Northeast Asian security was again challenged by Pyongyang’s series of projectile and new short-range ballistic missile launches. Amidst these tests was the collapse in negotiations after the failed Hanoi summit in February. What follows is a break down of those systems.

The 240mm MLRS rockets, often stationed in semi-hardened artillery sites, have been part of the DPRK’s arsenal since 1985. With an estimated range of about 25 to 31 miles, they are capable of carrying a relatively small warhead of about 100 pounds. According to an analysis based on photographs released by KCNA, the weapons are most likely powered by a smokeless, double-based solid fuel. Without any form of guidance, the 240mm MLRS systems would be used mainly to carry out saturation attacks on large targets such as frontline military bases and urban areas.

On the other hand, the 300mm—also called the KN-09—is a new guided artillery rocket that was first tested in 2013 and has an estimated range of 118 to 124 miles, capable of carrying a light, conventional warhead. Its origins are unclear but presumed to be a modified version of a Chinese 2S-1B rocket, built to strike rear-echelon targets 31 to 62 miles behind the first front. The missile consists of the so-called SY-300 precision strike rocket system; canard guidance fins that can be seen near the warhead section, and it is stated to have GPS/INS guidance which increases its precision strikes if a satellite navigation receiver to update the inactive navigation components is included in the guidance unit.

North Korea’s so-called “new-type tactical guided weapon” or KN-23 was also tested on the same day. This missile type resembles—and is equivalent of—a Russian Iskander (9M723, 22-26), of which export versions are capable of reaching as far as 174 miles when carrying an 882 to 1102 pound warhead (the domestic version varies from 248 to 311 miles).

This missile was also consecutively tested later on May 9, July 25, and most recently on August 6. What those tests have clearly demonstrated is the missile’s flexible travel distance; it flew 150 miles on May 4, 260 miles on May 9, 428 miles in July, and 280 miles in August. These demonstrate a range that could easily reach both South Korea and Japan. Moreover, if the missile really is a Russian-produced Iskander, policymakers should be troubled by what this missile can potentially do.

The Iskander is an ultramodern and versatile missile, comprising a single warhead equipped terminal guidance systems, that required years of development and testing. Iskander-E—the export version of the missile—can strike targets within a circular error probable (CEP) of 16 and 33 ft, using inertial guidance for its midcourse fight as well as electro-optical terminal guidance. The accuracy could be even greater if the systems were supported by radar or electro-optical sensors. Such accuracy adds far more danger when equipped with a conventional warhead and its many types including high explosive (HE), sub-munition dispenser, fuel-air explosive, and HE penetrator variants. The missile’s many targets could range from surface-to-air missile batteries, short-range missiles, airfields, ports, command and communication centers, to factories.

What is even more worrisome in addition to the KN-23’s accuracy is the fact that current missile defense technologies are not sophisticated enough to intercept these missiles. The reason is that these missiles fly on a depressed trajectory, can maneuver up to 30g in flight, and have decoys to trick interceptor missiles. Plus, the KN-23 can take advantage of the gap in South Korean and American missile-defense coverage. Patriot missile-defense interceptors are estimated to have an engagement ceiling of about 25 miles while THAAD and Aegis missile defenses have an engagement floor of roughly 31 miles, which creates a gap that between the interceptors’ layers at altitudes between them.

Before the international community could take another breath after Pyongyang’s consistent KN-23 tests, it has unveiled its “newly-developed large-caliber multiple launch guided rocket system,” first on July 31 and again on August 2. According to KCNA, “The test-fire scientifically confirmed that the tactical data and technical characteristics of the new-type large-caliber guided ordnance rocket reached the numerical values of its design, and verified the combat effectiveness of the overall system.”

A video of the launcher and projectile released by KCNA, although heavily pixelated, reveals a set of small fins on the projectile indicating its “guided” nature like the KN-09 rocket system that was tested in May. However, the rear end of the projectile does not appear to have the same tail fins like those of the KN-09, showing this new system is not consistent with the one from the KN-09. More crucially, the projectile itself appears to be larger in diameter than the KN-09; one analyst has suggested that it is a 400 mm rocket, although it is hard to tell due to how heavily pixelated the video is.

Although the very specifics of this new system are still unknown, it is reported to have the potential to extend North Korea’s multiple launch rocket capabilities, which currently stand at 118 miles, by at least another 37 miles, thus subjecting more U.S. and ROK targets to attack. To compare this new system to the Chinese WS-2 multiple launch rocket, which has an assessed range of 124 miles and is presumed to have an all-inertial accuracy of 600 m (0.37 miles) CEP, the new DPRK rocket system—if using the same guidance system out to 155 miles—must fall behind in its accuracy. Nonetheless, with the use of satellite-aided guidance, the system’s precision could be down to 65 to 164 ft—bringing a variety of point targets within its range.

It was already very unusual of North Korea to have conducted its missile test on August 6 when joint military exercises (JME) had just kicked off because North Korea had never before conducted a missile launch during any of the JMEs. However, Pyongyang has disclosed another new missile on August 10, which was tested near the eastern city of Hamhung where North Korea is thought to produce its solid-propellant missile airframes. Based on a report by the South Korean Joint Chiefs of Staff, it appeared to be a new “single-stage, solid-propellant, short-range quasi-ballistic missile that bears a strong resemblance both in missile and launcher to the United States’ MGM- 140 Army Tactical Missile System (ATACMS).” This system is different from the KN-23.

Taking that resemblance into consideration, it is a great indicator that the missile may include a separating warhead. This is important because when warheads are separable from the missiles, so too are payloads. This gives more options to the Korean People’s Army operating units as they can choose between high-explosive conventional warheads, submunitions, and possibly even chemical weapons payloads. The Songun ATACMS is also thought to have a large payload capacity in order to utilize canisters. This matters because, canisters come very handy on the battlefield for storage and reloading and are usually used by much larger, medium-range ballistic missiles such as the Pukguksong-2.

North Korea has also revamped other military capabilities such as submarines, one of which is claimed to be newly constructed and designed to carry three submarine-launched ballistic missiles. Additionally, Pyongyang’s cyber-attacks are rapidly growing and have recently generated $2 billion to fund its weapons programs.

The current situation is very far from the ultimate goal of denuclearization. The Kim regime has conducted its sixth missile test in a month during the U.S.-ROK military joint exercises and continues uninterrupted weapon development to counteract the balance of power that has dramatically shifted towards the South. Furthermore, North Korea’s recent statement that it will no longer entertain further talks with the Moon administration, combined with the lack of a deal between America and North Korea after all this time, make the situation rather dire.