North Korea's Weapons Launch: Kim Jong-un is Flailing and That is Good 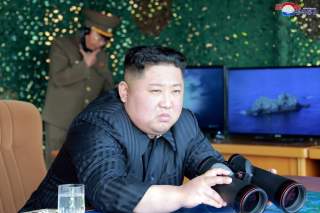 Since his second meeting with President Donald Trump ended abruptly without an agreement, North Korean leader Kim Jong-un has allowed a midnight press conference in Hanoi; fired his diplomatic team; called for the removal of an American cabinet member; thrown down an end-of-year negotiating deadline; threatened a space rocket launch and fired off short-range projectiles. But far from projecting the strength, Kim is reeling, epically uncertain about what to do.

Trump was thought to be an easy mark, a man so eager for personal diplomatic success that he would sign up to a fool’s deal that would pay North Korea to close down arguably the least valuable part of its complex of facilities for making nuclear weapons.

Kim’s stumble started at the end of February when President Trump canceled a planned joint statement at their Hanoi summit. Since that moment, Chairman Kim has been thrashing around his regime’s toolkit of propaganda, purges, provocations, and power politics, in search of an answer.

Last year Kim appeared a formidable statesman. The Trump administration was blamed for elevating his stature via summitry and the downplaying an evil regime’s cruelty. However, as we approach the June 12 anniversary of the Singapore summit—the first-ever meeting between a sitting North Korean and U.S. leader—Kim is floundering.

Kim’s four stages of indecisive grief comprise denial, blame, anger, and manipulation. Stage five may or may not produce a diplomatic breakthrough. Trump continues to express optimism, but such confidence is predicated on Kim making a strategic decision about embarking on real denuclearization that he has heretofore studiously avoided making.

Stage one of this new, harum-scarum Kim regime, was on display when the second Trump-Kim summit ended abruptly without a joint statement. After Trump walked away amicably, making clear the breakdown of talks was a result of North Korea demanding too much for doing too little, the Kim team emerged hours later for an extraordinary midnight damage-limitation press conference. North Korean Foreign Minister Ri Yong-ho took the lead on spinning the press with Pyongyang characteristics. Ri hyped Pyongyang’s offer to close Yongbyon—yet again—in exchange for the lifting of significant sanctions.  Former Secretary of Defense Robert Gates warned a decade ago about the dangers of buying “the same horse twice.”

It took some moxie to pretend that giving up so little in return for so much amounted to anything approaching a serious deal. The Yongbyon nuclear facility is home to North Korea’s plutonium program and includes a facility for uranium enrichment. However, intelligence officials have all but publicly confirmed the existence of at least one and perhaps two other uranium-enrichment facilities.

Furthermore, the removal of sanctions would also kill any incentive for Pyongyang to undertake further steps—such as those that would finally result in reducing North Korea’s unknown-sized nuclear arsenal. Even so, when reeling, Kim pretends he is on the side of angels. As the night-owl Ri declared, “Our principled stand will remain invariable and our proposal will never be changed even though the United States proposes negotiations again in the future.”

Stage two of the Kim regime nosedive occurred during and after the sixty-hour-plus train ride and the recalling of all officials to learn their fate following the debacle in Hanoi. After Kim’s train ride from hell, the chief organ of the Workers’ Party of Korea, Rodong Sinmum, declared that the leader’s trip had demonstrated “the power of the single-minded unity.” Party propagandists propagated that narrative to suggest that the dynastic dictator enjoys popular legitimacy—something much easier declared and unlikely to be put to a democratic vote.

Then Kim proceeded to fire his negotiating team. Top female diplomat Choe Son-hui was elevated to be first vice foreign minister and a member of the State Affairs Committee. Not only is Choe supplanting the position previously held by Kim Kye-gwan for most of the past decade before he dropped from public view two years ago, but she also appears set to lead future negotiations with the United States.

Stage three of the Kim regime’s playbook since Hanoi has included ultimatums. For instance, newly-promoted Choe has threatened “truly undesired consequences” unless America changes its negotiating stance. In mi-April, the North Korean Foreign Ministry called for the removal of Secretary of State Mike Pompeo for “talking nonsense.” And in late-April Choe castigated Pompeo and National Security Advisor John Bolton, saying “The ‘change of path’ mentioned by the US [. . .] is not a privilege that the US has but is our choice.”

Before Kim’s January 1, 2018 peace overture to South Korea that set in motion the current spate of negotiations, Pyongyang ordinarily signaled its determination and displeasure through provocations involving major weapon systems, especially ballistic missiles and nuclear weapon tests. Having accepted a moratorium on both of those activities since peace talks got underway, Kim has had to indicate his belligerence through micro acts of aggression. After his failed second summit with Trump, the Kim regime has hinted at launching a space rocket that could mask an ICBM program from his Sohae launch facility. He also claimed a test of a short-range tactical missile before, with more fanfare this past weekend, conducting a “strike drill” with short-range projectiles (but not ballistic missiles) from ground-based multiple rocket launchers.

The fourth stage of Kim regime behavior post-Hanoi involves the old playbook for shoring up ties with other major powers to divide and conquer outside powers. Although Chinese President Xi Jinping has pledged a visit to Pyongyang, that trip has been on hold for some time. Meanwhile, Kim ventured to Vladivostok for his first summit meeting with Russian President Vladimir Putin. Notwithstanding a resurgent U.S.-Russian rivalry, Putin surprised many by telling the world that he agrees with the American idea of denuclearization of the Korean peninsula. While the Russian leader was eager to remain a player in determining the future of the peninsula, Putin told the press after his meeting with Kim, “our interests coincide with those of the United States on this issue…we advocate complete denuclearisation: this is a fact.”

The fifth stage of post-Hanoi behavior could veer toward real diplomacy or terminate the quest for a rapprochement. The outline of an accord remains clear: a firm commitment to the complete elimination of weapons of mass destruction (WMD) in exchange for security guarantees and a roadmap to normalization and brighter economic future. Such a deal would require phased implementation, but the first phase must be a substantial step such as the freezing of all fissile material production—not just one element of the regime’s nuclear fuel-cycle production. The quid pro quo for that step towards—but not yet accomplishing any—actual denuclearization would be mostly security assurances, a peace declaration, and other political measures. Planning for economic development, however, could commence. If this idea is to have any remaining hope, the maintenance of pressure is required, because the Kim regime knows how to take the most and give up the minimum for it.

Kim’s introductory visit to Vietnam changed his life, just not along the lines he was hoping. The gnashing of teeth will stop when Kim does what is necessary to propel diplomacy forward or at least put out of its misery America’s latest attempt to halt North Korea’s bid to become a permanent nuclear-weapon state.

Perhaps equipped with a new negotiating team, straining under the growing weight of sanctions, Kim might yet adjust his thinking and sign a comprehensive deal to eliminate all his WMD and their means of delivery in exchange for transformed relations and future prosperity.

In a sober presentation at Hudson Institute by Cindy Warmbier, mother of UVA student Otto who lost his life at the hands of the North Korean regime, Kim was described in words that many think but few officials express: “He lies, he lies, he lies—all for himself and his regime.” Without pressure, Mrs. Warmbier warns, there is no hope an “evil regime” will change. With pressure, there is at least a remote chance of success. But the diplomatic window is closing and very soon someone that window will be locked shut.