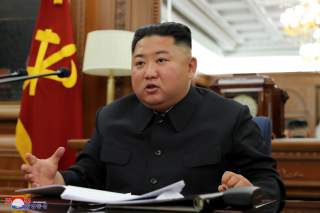 As we get closer and closer to the new year, the anticipation of a major North Korean provocation is getting louder and louder. Korea analysts in the Beltway’s think-tank community have been pouring over satellite imagery to determine whether an abnormality is occurring at one of Kim Jong-un’s test facilities. The Pentagon is scouring intelligence and conducting reconnaissance flights over the Korean Peninsula, searching for any grain of evidence that the Kim regime is preparing a blockbuster event during (or immediately after) the holiday season. Thre are even some worries that an intermediate-range ballistic missile test over Japan is only a matter of time.

President Donald Trump’s diplomacy with the North is on incredibly shaky ground.  As Professor Adian Foster-Carter of Leeds University wrote on the North Korea monitoring site 38 North, 2019 was a year of “Delays and Delusions, Taunts and Tests.” The talks between Trump and Kim that began with some promise and a torrent of rosy headlines 18 months ago have been stuck in the mud throughout the year.  The period between the summit in Hanoi and the meeting at the DMZ in June was an unproductive stretch. It took nearly four months after Trump and Kim’s DMZ meet-and-greet before those discussions actually happened. And they finally did, the talks concluded in a huff after a single day.

Stephen Biegun, Trump’s North Korea envoy and new deputy secretary of state, was forced to make an end-of-year journey to South Korea, Japan, and China, where his calls to North Korean officials were left unanswered. On the surface, you certainly couldn’t be blamed for thinking that Kim Jong-un is no longer interested in talking with his pen pal in the White House.

Stalling negotiations and launching a holiday surprise in the form of another ICBM or nuclear test, however, are two entirely different things. The former is a part of the dance, a bid to enhance one’s leverage by pressuring the other side to come back to the table on your terms.  The latter is a reckless move to tank the talks altogether, throwing the diplomatic baby out with the bathwater.

The diplomatic situation doesn’t look especially promising at the moment. But the fact is that both have a good reason to temper their emotions, take a deep breath, look at the big picture, and act with restraint.

If Kim were to lift his unilateral moratorium on ICBM tests and actually launch one to inaugurate the new year, he would be daring President Trump to pack up his things and walk away from diplomacy. Trump may be an unpredictable showman who loves to swim against the tide of conventional wisdom, but he is also a notoriously fickle man with skin as thin as tracing paper. If there is one thing he can’t stand in this world (besides Hillary Clinton, Adam Schiff, and Nancy Pelosi, that is), it’s being taken to task in public, humiliated, and made to look like a bumbling fool for the entire world to see. He doesn’t take kindly to such things and indeed views public humiliation as the worst insult somebody can inflict on their fellow man.

Kim ordering an ICBM or nuclear test would be exactly that—the quintessential insult directed at an individual who tends to lash out whenever he is attacked. Such tests would have practical applications for the North’s technical prowess, for sure.  But just as significant, an ICBM launch would be a massively symbolic demonstration from Kim himself that he no longer takes Trump as a serious person (assuming he ever did). By taking away the one thing—the absence of North Korean long-range missile and nuclear tests—Trump has been able to brag about over the last year and a half, the North Korean leader will be making a purposeful choice to kick the American president in the shins. And Trump is pre-programmed to take such an offense badly.

According to a December 23 report from CNN, a source familiar with Kim’s thinking stated that the North Korean leader will act conservatively (note: the report entirely relied on just one source). If Kim makes an announcement, it will be about officially taking denuclearization off the table rather than declaring a new period of military exercises and missile tests.

If this is the course Kim Jong-un plans to follow, it would save Trump from embarrassment and at least keep the chance of additional dialogue alive. Kim making a splash—whether it’s designed to register his disappointment with the diplomatic process, throw the ball back in Washington’s court, or coerce the Trump administration into adjusting its negotiating strategy—would run the risk of overplaying his hand and throwing away the last opportunity for a normalized relationship with the United States in the Trump era.