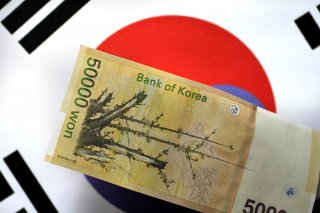 In his poem “The Present Crisis” (1845), the Cambridge, Massachusetts abolitionist James Russell Lowell called crises “God’s stern winnowers, from whose feet earth’s chaff must fly.” That’s a familiar sentiment as pestilence—one of the biblical Four Horsemen of the Apocalypse—tramples societies and economies across the globe.

Some societies have fared better than others at hobbling the horseman, however. Which brings us to the Korean Peninsula. South Korea has performed especially well. Official policy helps explain why. Early on Seoul enacted an aggressive regimen of testing for coronavirus and quarantining the afflicted to arrest its spread. Commentators have also been quick to ascribe Seoul’s success to Korea’s Confucian culture, a culture that supposedly predisposes Asians to obey authority even when it hurts.

Now, I wouldn’t altogether discount the notion that culture—habits of thought, feeling, and deed shaped by a multitude of factors—nudges Koreans to comply with burdensome public-health measures more willingly than do individualistic Westerners. It plays some part. But Confucianism is far from the whole story. Even a casual survey of South Korean, Taiwanese, or even Japanese politics reveals that free Asian countries are home to boisterous societies. Peopling these lands are citizens who—far from being docile or submissive—have a penchant for orneriness in public affairs. Plus, their political and strategic cultures are best described as a hybrid between Confucian and Western traditions. These are not cultural automatons, and they hail from a complex society.

It’s a mistake to draw too straight a line from Confucian precepts to the daily news from the Korean Peninsula.

Still, culture matters. Historians have taken an interest in it at least since Herodotus spun tales about the peculiar customs he observed in foreign lands in Europe and Asia. He pronounced custom king in human affairs. Now fast-forward to the eighteenth century, when the British philosopher David Hume penned an essay “On National Characters.” Hume pointed out that analysts of culture tend to concentrate on “moral” sources of national character, by which he meant a people’s distinct history, traditions, and philosophies. To oversimplify a venerable tradition, Confucianism posits that people submit to authority so long as they regard the ruler as virtuous. If a ruling regime loses legitimacy in the eyes of the governed, they may withdraw the “Mandate of Heaven.” The regime will plunge into crisis. It might even be overthrown.

However much they might disagree about this or that subject, South Koreans presumably consider their democratic system a legitimate system of governance. Hence their obedience to coronavirus edicts issuing from the Blue House. Their behavior conforms to Confucianism.

Hume deems it a mistake, though, to concentrate overmuch on the moral factors that mold national character. Customs and mores, he writes, flow not just from sociological wellsprings but from the physical surroundings. Look at your map. South Korea occupies the southern half of the Korean Peninsula, a half-island grafted onto the Asian landmass. South Korea is a de facto island in geopolitical terms, enclosed by saltwater on three sides and a densely fortified border to the north. Islands are ideally fitted for social distancing. The stopping power of water limits cross-border contamination to the east, south, and west, while the perpetual military standoff with North Korea seals off the northerly frontier.

Geography, in other words, simplifies the challenge of containing the spread of pestilence from beyond South Korean borders.

It also primes South Koreans to think like islanders. If water helps fend off threats, it also makes the country a closed system. Left uncontrolled, a coronavirus outbreak could spread throughout the country and wreak havoc on its inhabitants. Knowing that, South Koreans have a sense of urgency that prompts them to accept even onerous public-health measures. Self-preservation, the most elemental human motive, thus aligns with and reinforces whatever Confucian habits animate ordinary people. Continent-straddling countries like the United States bear more resemblance to open systems, and thus may find it harder to summon up the popular resolve necessary to execute rigorous testing and quarantine measures. Here, too, geography aligns with national tradition. In Korea the tradition is Confucianism, in the United States rugged individualism. But in America’s case the confluence of physical and moral factors works against the war on contagion.

What about North Korea? Consider Hume’s physical factors. The stopping power of water safeguards the country’s eastern and western frontiers, while the border with South Korea mostly blocks contagion from the south. The North does share borders with China and Russia to the north, so its insular character is less pronounced than for the South. Its borderlines are more permeable. On the moral front, North Korea is the quintessential closed society, worthy of the sobriquet Hermit Kingdom. Indeed, one imagines social distancing has been the order of the day for the North Korean populace ever since Kim Il-sung came to power in the 1940s. Stifling any hint that they countenance rebellion is how people survive under totalitarian rule. Like the Chinese Communist Party next door, the Kim dictatorship deploys brute force to prevent the people from withdrawing the Mandate of Heaven. These are anti-Confucian regimes.

That being the case, it comes as little shock that Pyongyang has rebuffed American offers to help combat disease. What’s a little plague next to the prospect of having your archfoe subvert your rule? Instead the party line holds that the country has suffered zero cases of coronavirus. Nothing to see here, move along. The regime’s standoffishness recalls how Spartans evicted Athenian forces that had come to their aid following the earthquake of 464 B.C., helping suppress a slave revolt that shook the military oligarchy’s grip on power. You take your help where you find it—even from a rival—when you find yourself bestriding death ground. You send that help away the instant you step off death ground, once mortal danger recedes.

Spartans feared democratic Athenians would spread ideas inimical to martial rule, subverting the oligarchic system. In other words, the contagion of ideas appeared almost as menacing as the physical threat posed by the slave uprising. The ideological plague had to be banished before it found purchase within Spartan society. The lesson from classical Greece: Pyongyang will reject Washington’s entreaties unless it concludes Kim Jong-un’s rule is in jeopardy and U.S. assistance will save it. If the regime does admit U.S. medical specialists to the country, it will cordon them off from the populace to the utmost extent possible in hopes of containing any ideological infection. And it will jettison the American contingent from the Hermit Kingdom the second the immediate crisis passes.

And lastly, to return southward, the contagion threatens to wear away at the U.S.-South Korea alliance’s fighting strength at a time when relations between Seoul and Washington have already frayed amid quarreling about who pays how much to sustain the presence of U.S. forces on the peninsula. Military forces only become proficient by practicing operations and tactics; the more reps the better. Social distancing works against proficiency as the authorities cancel or postpone exercises and maneuvers. The problem of “interoperability” is even more acute for multinational forces, which have to surmount disparities in language and culture as much as doctrine and unlike hardware.

Strength is a multiple of resolve and capability. If resolve is under duress because of burden-sharing disputes, and if South Korean and U.S. forces don’t get in their joint reps this year, the alliance will find itself in a weakened state while trying to deter antagonists like North Korea and China. Social distancing makes perfect sense from the standpoint of public health; it comes with heavy opportunity costs from a diplomatic and military standpoint.

Tough days, these. Yet James Russell Lowell did not counsel despair in times of trial. In fact, Lowell spun a hopeful vision, reminding Americans how their heroic ancestors survived and thrived amid tumult. That’s a fitting attitude for our times. Let’s learn from South Koreans; reach out to North Koreans while entertaining no illusions about prospects for cooperation; and stand to our defenses.

Let’s refuse to be chaff for the grim winnower walking among us.