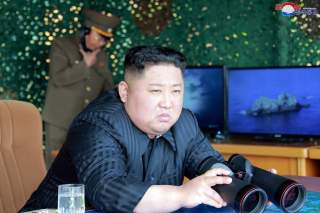 SEOUL, SOUTH KOREA — The great metropolis of Seoul sits barely thirty miles from the Demilitarized Zone. The city is the canary in the mine for the state of inter-Korean relations. All seemed well in late May as residents were frenetically active, paying little attention to events across the border in North Korea. However, those in government and the broader policy community were less certain.

South Koreans should be confident about the future. Their nation is two years removed from a catastrophic political meltdown by the ruling conservatives. Transitions between the ruling and opposition parties have become routine. Although slowing, the economy remains one of the dozen largest on earth. South Korea has become a cultural as well as commercial powerhouse.

Nevertheless, the country’s international situation remains unsettled. Relations with Japan are awful; those with China are a bit better but still embittered after Beijing sanctioned the Republic of Korea over its installation of America’s THAAD missile defense system. Although the Moon government officially praises relations with Washington, private assessments of President Donald Trump’s commitment to the alliance are far more negative.

Then there is North Korea. One aide to President Moon Jae-in, who asked not to be identified, complained that the last two years were “like a roller coaster ride.” Expectations were high for the February Kim-Trump summit. Virtually everyone predicted that President Trump and North Korea’s Supreme Leader Kim Jong-un would broaden ties and begin denuclearization and sanctions relief, which in turn would speed inter-Korean cooperation. The meeting’s collapse left South Koreans in shock. Presidential Special Adviser Moon Chung-in called the situation “pretty bad, with North Korea not responding to us, and not responding to the U.S.”

Skeptics of the opening to the Democratic People’s Republic of Korea, which they view as more of the same—with the likely outcome more DPRK promises unfulfilled—were happier. A breakdown would make further allied concessions unlikely. However, the pessimists were outnumbered by those like the Blue House official who allowed: “I worry that we have a unique opportunity that could be lost.”

If the current “stalemate,” as today’s situation was commonly termed, is not broken, then Kim could shift course, as he threatened to do in his New Year’s address. The best-case scenario would be a return to a low-key cold war, with reinvigorated arms development. The worst-case scenario would be resumption of nuclear and missile testing next year as the U.S. presidential race heats up. Facing public humiliation in an election year, President Trump would be tempted to return to a policy of “fire and fury.”

Although most critics of this course focused their ire on National Security Adviser John Bolton, their ultimate frustration was with the president—brave enough to upend diplomatic practice in meeting with Kim but too ignorant to understand why an all-or-nothing negotiating stance was doomed to fail. Members of the Moon Jae-in government have been especially worried; their leader’s poll ratings are falling, and legislative elections are scheduled next year. Détente with the DPRK is his main achievement so far.

Of course, it is important to maintain reasonable expectations. Virtually no one in either Seoul or Washington believes that the North ultimately will give up its nukes, other than Presidents Moon Jae-in and Trump. During a meeting with fellows at a respected think tank one stated that he believed there was a slight chance Kim was prepared to disarm; his colleagues snorted in disbelief. I share the latter view, since the Kim dynasty has spent heavily on nuclear weapons, closely tied its future to nukes, used them to bind the military to the regime, and relied on the weapons as the ultimate deterrent.

Nevertheless, Trump and Kim still have much to talk about. Pyongyang has halted nuclear and (most) missile tests, seemingly in exchange for suspending military exercises and engaging in negotiations. The North Korean leader might be willing to formalize his halt and take further steps to cap his nuclear arsenal—such as closing Yongbyon, as was discussed in Hanoi. He also might prove willing to address his biological and chemical programs, as well as threatening conventional deployments.

Of course, Kim might not agree to anything or ask too high a price; he might cheat or repudiate the deal, as critics contend. However, that is unknowable without negotiating. Any allied concessions could be structured to end if the North Koreans walked. If a nuclear DPRK is inevitable, then a better one with a fixed arsenal and no operational ICBMs than one with a steadily growing, improving, and diversifying armory.

Moreover, in Seoul Kim is widely seen as different than his predecessors. He is no liberal—he has executed hundreds of regime officials since taking over in December 2011. However, he evidently is serious about economic reform and has adeptly played the diplomatic game. One South Korean official involved in negotiations with the North said: “I can say Kim Jong-un does not want to live like this the next fifty to sixty years.” Kim’s behavior at the three Kim-Moon summits impressed ROK diplomats. He appears to envision a different role for his nation, even if still armed with nuclear weapons.

Even limited progress would be worth the effort. Northeast Asia would breathe easier if North Korea and the allies moved steadily, however slowly, down the disarmament road. Why abandon what looks to be the best opportunity in seven decades to bring the Korean civil war to a close?

To give negotiations a boost America’s ambassador to the South, Harry Harris, proposed that the two nations discuss recovery of the remains of American war dead. “We should continue to have dialogue, and in parallel with the denuclearization piece” included in last year’s Singapore declaration,” the retired admiral said.

Remains recovery is a good starting point but would be seen by the North as only benefiting Washington. The administration should propose moving on the entire nonnuclear agenda from Hanoi. Trump should follow Kim’s example and make the offer in a personal note to the Supreme Leader, which Secretary of State Mike Pompeo could deliver.

The North Korean diplomats I have spoken to in recent months have consistently argued that the objectives listed in last year’s Singapore summit statement were presented sequentially: the two governments would increase bilateral relations and improve regional peace, and then address denuclearization. The argument might be self-serving but it makes sense. Kim would be a fool to defenestrate his nuclear deterrent without being convinced that the allies would not exploit his vulnerability; and that would necessitate better bilateral and regional relations.

If there is any chance of achieving Washington’s objective of comprehensive verifiable irreversible denuclearization, then it requires addressing conditions set by Pyongyang. Instead of demanding that the North hand over weapons before Washington has demonstrated a changed attitude, the administration should take steps to convince the North that the United States is prepared to eschew military coercion.

The proposed package for Hanoi would help do so. The two governments apparently had agreed to open liaison offices and issue a peace declaration. Also, on the list was recovering war remains. It appears that neither of these issues was particularly controversial, but they were nevertheless tossed into the dustbin alongside the failed provision regarding nukes for sanctions relief.

Washington has long viewed establishing liaison offices and affirming regional peace as rewards for Pyongyang. Yet opening communication channels and establishing interlocutors is especially important with a dangerous, unfriendly regime. Imagine the Cold War, including the Cuban Missile Crisis, without diplomatic relations between the United States and the Soviet Union. Imagine the reverse: what if Washington and Beijing had official contact in late 1950, as the two governments neared a military confrontation over the Korean Peninsula. Perhaps war could have been averted.

As part of this process Trump should indicate that he intended to use the opportunity to dialogue over a number of issues, including human rights. Why exchange diplomats if they never talk?

A peace declaration should be viewed similarly. It is primarily symbolic, but nevertheless would represent the changed situation on the peninsula. Critics worry that it would raise questions about America’s military commitment to the South, but that should not be an issue because the ROK has raced so far ahead of the North economically, and thus has the wherewithal to provide for its own defense. This is a fact irrespective of what the parties say about their relationship.

For good measure the administration should unilaterally lift the dual travel ban (currently, Americans cannot go there, and North Koreans cannot come here). The prohibition never made any sense because Americans visit war zones without restriction. It was just another element of maximum pressure. However, Washington should want more, not less, personal contacts both ways.

These steps would address Kim’s professed desire for better relations. Then the United States would be in a stronger position to insist on progress on nuclear disarmament, which would be necessary for any sanctions relief. However, the latter would require that the president break denuclearization into pieces. Chung-in Moon argued that “the U.S. should send a clear message that it is willing to negotiate a ‘small deal,’” as well as “relax its inflexible posture.” Another ROK government official said that he didn’t “like the idea of talking in terms of size.” Rather, “we need a good deal to sustain the process and improve relations.”