Nuclear War with North Korea Is Still Possible. Trump’s ‘Walk’ Across the DMZ Made That Less Likely. 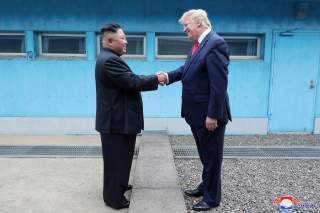 Donald Trump did the seemingly impossible by being the first sitting U.S. President to set foot in North Korea. On Sunday, Trump met with North Korean leader Kim Jong-un at the Korean demilitarized zone (DMZ), where they held an hour-long summit. They also briefly stepped over the border together into North Korea and back again, replicating the same historic act previously carried out by South Korean President Moon Jae-in and Kim. While many of Trump’s critiques called it nothing more than a photo-op, this symbolic act brought down tensions as Washington and Pyongyang promised to resume negotiations.

How can anyone not applaud when two nations who have technically been in a formal state of armed conflict for nearly seven decades seek dialogue? At least for the moment, it seems the Trump Administration has made escalation management America’s primary goal, ensuring any pause in talks does not slip back to the dark days of 2017. The alternative runs the risk of an unwanted war.

The unfortunate fact is that Kim has nuclear weapons—enough fissile material for as many as sixty-five warheads, to be exact—and is unlikely to give them up anytime soon. It is also unsettling that Pyongyang’s intercontinental ballistic missiles (ICBMs) seem to have the range needed to reach the continental United States. However, Americans and policymakers must remember that the current state of affairs—Trump and Kim are writing letters to one another—is a vast improvement over mutual threats and Trump tweeting “fire and fury.”

Think of the alternative to diplomacy and where tensions could lead. A devastating nuclear war in which millions die is more frightening than anything else, and conflict prevention should be Washington’s primary aim. Working together with Kim to avoid a war that neither side wants is in both countries’ interests. Improving relations, institutionalizing de-escalation mechanisms, and ensuring open-lines of emergency communication are doable and necessary.

In fact, finding mutually-acceptable ways to manage future crises will be easier than convincing Kim to get rid of his nuclear weapons. Washington and Seoul are economic and military giants compared to Pyongyang—North Korea’s economy is smaller than Vermont’s. Kim understands this and knows his nuclear arsenal, although small by comparison, is still enough to deter America.

Furthermore, consider that previous U.S. administrations considered using force—and yes, the Obama Administration did consider this “contingency”—to destroy Kim’s nuclear program, only to decide against it because the human costs would be too high. Moreover, the only way Washington could be sure every missile, bomb, reactor, and research compound was destroyed would be to send in ground troops and invoke a war of what would become regime change. Kim at that point would not only let loose any nuclear weapons left in his arsenal but also fire off any chemical, biological or radiological weapons he has tucked away—and millions of lives would be lost.

From Pyongyang’s point-of-view, the North Korean nuclear program has prevented a war, not caused one. Besides, the Cold War was waged more-or-less peacefully between the nuclear-armed United States and the Soviet Union—with fighting conducted by with and by proxies instead of head-on with each other. Today, nuclear deterrence and mutually-assured-destruction still matter. While Pyongyang might not be able to threaten the destruction of the whole United States and has not tested the heat shield technology for its warheads to prove their ICBMs are fully operational, the threat has advanced to such a point that it should clearly give Trump Administration officials pause.

Finally, Kim has studied the history of America’s wars in Iraq and Libya and has concluded Washington prefers to only attack non-nuclear adversaries. But Kim also knows that the hawkish proponents of “limited” strikes and regime-change wars, such as National Security Adviser John Bolton, still hold much sway in Washington and the current administration.

As a result, North Korea faces the classic security dilemma: Kim can never be certain of U.S. intentions and therefore must always be on guard.

For Washington, this means Kim cannot be coerced or pressured into giving up his weapons. History proves that the more pressure we put on North Korea the more pressure they respond with—and hold on tighter to the nuclear button. Further, policymakers must come to realize that Kim is always worried about his security and seeing what Washington might do next. Therefore, a return to tensions is very dangerous; both sides distrust each other and are constantly watching each other’s moves. An accident, misinterpretation, or false move could result in an escalation that results in war.

While we would love to see a day where North Korea gives up all of its nuclear weapons, we must work to build a foundation for crisis management before anything else can be done. In this vein, Washington should pursue liaison offices and continue freezing large-scale annual military exercises in exchange for Pyongyang suspending ICBM and nuclear testing as well as advancing negotiations to finally end the Korean War. Trump has a chance to build peace and confidence on the peninsula, making it less likely in the future that a crisis could get out of hand. And that’s something all Americans, regardless of party or politics, should cheer for.

Harry J. Kazianis (@Grecianformula) and John Dale Grover (@JohnDaleGrover) both work at the Center for the National Interest, a non-partisan foreign policy think tank based in Washington, D.C. where they manage the center’s Korean Studies program. The views expressed are their own.