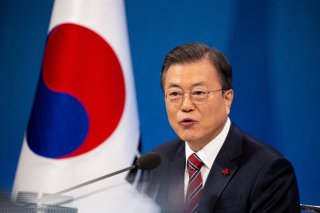 Moon Jae-In’s presidency in South Korea will end early next year. Moon has staked his presidency on a breakthrough with North Korea. He appears to be considering another summit with North Korean supreme leader Kim Jong-un. Ostensibly on the agenda is a formal end to the Korean War, with the hardly disguised hope of bringing Kim to the table for wider discussions and, ideally, nudging him to speak to the Americans.

Moon and Kim have met three times already, and little has come of the meetings. Some minor inter-Korean deals were struck, but their primary purpose was to lay the groundwork for a North Korean-U.S. rapprochement. The North takes inter-Korean summits less seriously than the South does, as the North is focused on the United States and tends to read the South as a junior alliance partner whose foreign policy is dominated by the Americans.

North Korea is content to chat with South Korea, but it rarely makes major deals or concessions with the South. The North assumes the Americans put constraints on the South’s bargaining space (which, while not formally true, is likely informally so). More importantly, the North wants the prestige of speaking to the Americans—to be treated as an equal sovereign state, and as an equal Korean state, by the global superpower. Playing hard to get with the South and reserving its main energies for the Americans also snubs South Korea and reminds it that the North views it as an American lackey despite all its superior wealth and modernity.

This raises the question of the purpose of yet another summit. Will it be mostly show, with little substance, like the previous Moon-Kim summits?

That is not necessarily a reason to not meet again. It is always possible that one more meeting might be the one where the North finally starts to negotiate seriously with the South. And given just how dangerous North Korea is, it is usually best to keep on engaging, to keep on trying.

Certainly, this South Korean government wants that. Moon has been trying for years to forge his own inter-Korean peace track without tying every serious change on the peninsula to U.S.-North Korea progress. This has not worked to date, but it is a deeply held belief of Moon’s left-wing coalition that the South must continually try to engage the North, even if that means distance from the Americans, who—former-President Donald Trump’s made-for-TV summits aside—tend to be much more skeptical of leader-level meetings with the North.

This also goes down uneasily with the South Korean public, with whom the U.S. alliance is popular. That past inter-Korean summits have mostly been pageantry—primarily because the North insists on serious dealing only with the Americans—do not encourage enthusiasm here. Summit hype today is far lower than it was in 2018, if only because no one really expects much from such meetings anymore. Moon’s coalition will support his effort of course, but the South Korean center has lost faith in Moon’s ability to bring Pyongyang seriously to the table, while the staunchly anti-communist South Korean right is now deeply suspicious that Moon is some kind of North Korean sympathizer.

So it increasingly looks like this would be more process for process’ sake. The logic here is that if we just keep talking and talking to North Korea, then a breakthrough might somehow occur. Also, at minimum, North Korea will not launch a provocation on the border if we are talking to them.

Finally, the real reason for any further summit is likely that Moon is desperate because he has bet his presidency on a North Korea breakthrough.

Moon ran for president on a domestic program of social democracy, emphasizing issues like transparency, reducing corruption, equity, and so on. This fairly typical left-of-center messaging plays well here, where there is a strong perception that business and political elites are an unaccountable dominant class. Moon’s foreign policy views—to robustly engage Pyongyang—were known but not the focus of his campaign.

Yet as president, the North has completely taken over his efforts and energies. His leadership on the coronavirus has been excellent, and last year’s world-class quarantine effort has justifiably propped up his polling. But it is a revolution in North-South relations which really moves him, and he has more strenuously—slavishly to his critics—engaged the North than any of his predecessors.

Unfortunately for his legacy though, little concrete has come of all this effort. Moon met Kim three times; Trump meet Kim three times. There was enormous hype for years. Before the onset of the coronavirus pandemic, I attended one conference after another here about ending the Korean war, a North-South ‘peace regime’ or ‘peace economy,’ sanctions rollback, mutual disarmament, and so on. There was a tremendous vibe of movement and change, and Moon himself relentlessly talked this up in his speeches. So enthusiastic was he in comparison to the unchangingly dour North Korean response, that conservatives here started calling him North Korea’s foreign minister.

So now as Moon slides into lame-duck status with the presidential election less than a year away, he is almost certainly desperate. He gambled, big, on the North, and he has precious little to show for it. Any remedies for the situation on the ground—North Korea’s gulags, forward-deployed forces flush against the demilitarized zone, weapons of mass destruction, no deal with the Americans—remain completely unrealized.

Moon will try again. He has no other play. But the optics will be uncomfortable. Moon has already been criticized in the press here for cloying supineness before Kim in his desperation for a deal, especially now that the new team of U.S. president Joe Biden has pretty clearly signaled that they are just waiting Moon out. Given all this, I doubt Kim will agree to another summit.