The One Thing That North Korea Does Well Is Survive 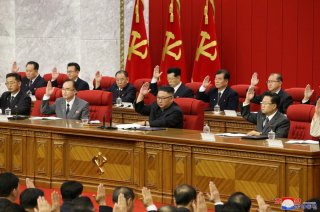 The ruling Kim regime of the Democratic People’s Republic of Korea (DPRK) is on death watch again. The country faces a serious food shortage on top of pandemic fears and a recent cutoff of trade with China.

By all reasonable assessments, the Kim regime should have collapsed already. In addition to past famine, North Korea suffers chronic economic underperformance due to mismanagement and corruption. The DPRK has decisively and badly lost its competition with the Republic of Korea.

The legitimacy of the paramount leadership has declined over time. Kim Il-sung was an anti-Japanese guerrilla fighter who successfully purged his domestic rivals to keep his position, but his successor son Kim Jong-Il was soft and relatively unaccomplished. Third-generation leader Kim Jong-un was even less accomplished when he suddenly got the job as an obese 30-year-old. The government tries to maintain the DPRK as an island of economic and political stagnation within a region of exceptional dynamism. North Koreans are increasingly aware of their relative lack of prosperity, particularly in comparison with their cousins to the south.

Despite those problems, certain features of the DPRK political system have made the ruling government especially resistant to removal. These features will continue to bolster the regime’s survival during the current period of crisis.

It’s useful to think through various ways that the ouster of a regime might occur.

One means is a massive popular revolt that overwhelms the ability of national security forces to subdue it. An example is the overthrow of the government led by Communist Party General Secretary Nicolae Ceaușescu in Romania in 1989. Like the DPRK, Ceaușescu’s regime maintained a large, brutal security apparatus and a personality cult. Ordinary North Koreans, however, have no access to weapons, no means to organize an effective uprising, and little or no demonstrated desire to march on the capital.

A second way the DPRK regime might fall is loss of support from either of two key groups: Pyongyang elites and the military high command. Kim Jong-un has made clear his lack of compunction about punishing senior officials. This creates a strong disincentive for plotting to take Kim down. More importantly, the Kims have tried to keep both of these groups happy through gifts, the construction of amenities in Pyongyang, and the Songun (“military first”) policy. Many would-be elite opponents of the regime may not believe they would be better off under a new government, and therefore support the Kim regime despite its failings.

A third possible avenue to political change in the DPRK is the China model. After Mao Zedong died, the Chinese Communist Party managed to change policy direction while maintaining its monopoly on political power and without renouncing Mao. Under Deng Xiaoping’s leadership, China embraced integration into the global economy, curtailed its sponsorship of armed uprisings abroad, and tried to present itself as a responsible international citizen. Many outsiders hoped that Kim Jong-un, who attended school in Switzerland, might choose a similar path. By now, however, these hopes have faded. Given Kim’s relatively young age, and the hardline attitudes expressed by his younger sister and possible successor Kim Yo-jong, there is no reason to expect such a moderation of DPRK posture in the foreseeable future.

Finally, the politics in a poor, authoritarian country might theoretically evolve as a result of economic development, as a growing middle class demands political liberalization and a more favorable climate for international business. This hope, unfortunately, conflicts with the DPRK government’s manifest calculation that a stronger society empowered by privately-held wealth is a threat to the regime’s hold on power. This led, for example, to Pyongyang’s attempt to destroy the accumulated savings of moderately-prosperous North Koreans in 2009.

Having survived hard times before, the regime will likely persist through the present crisis. It’s the one thing Pyongyang does well.

Denny Roy is a Senior Fellow at the East-West Center in Honolulu. He follows Asia-Pacific strategic issues.