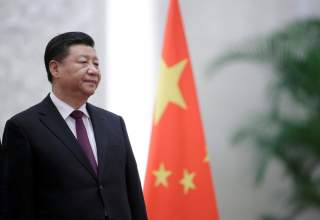 As the United States pushes North Korea toward denuclearization, it should focus more on the Chinese lifeline to this rogue regime. An ally and neighbor of North Korea, China is a key player in the United States’ two-track strategy to convince Pyongyang to give up its nuclear arsenal of weapons: maximum financial pressure and diplomatic outreach. The United States should call out China for its insidious enabling of North Korea and point to the Kim regime’s money trails through China.

The overwhelming volume of North Korean commerce flows through China. Conversely, trade with North Korea is an important source of revenue for many Chinese cities bordering North Korea. In a region that primarily relies on coal and manufacturing, both local firms and local government officials rely on North Korean trade to meet growth targets. Forty percent of trade in Dandong, a Chinese border city, comes from North Korea, which explains why so many Dandong-based companies have subsequently been sanctioned for dealing with North Korea in violation of UN and U.S. laws.

Dandong Hongxiang Industrial Development Company, for example, transacted over $500 million worth of business with North Korea before being sanctioned by the United States in September 2016. This kind of business is replicated throughout the provinces of Liaoning and neighboring Jilin. In so doing, numerous Chinese businesses are reportedly defying UN Security Council Resolutions.

A key reason why there are so many Chinese sanctions busters is purely commercial. Local government officials have to meet Chinese government growth targets and will go to extremes to do so, including inflating growth numbers, degrading the environment, or, as in Dandong, exploiting trade with North Korea. Another company, Dandong Dongyuan Industrial Co. Ltd., illegally exported over $28 million worth of items associated with nuclear reactors to North Korea between 2013 and 2016. While some local government officials may not be fully appraised of China’s obligations to UN Security Council Resolutions, others do so willingly.

Besides domestic growth interests, China also gains internationally from looking the other way on trade with North Korea. Besides interests in avoiding an armed nuclear confrontation, China also reaps diplomatic dividends. A nuclear confrontation would create a refugee exodus from North Korea into China, placing financial constraints on China. The collapse of North Korea would also remove a longstanding buffer between China and the Western military forces in South Korea, raising the possibility of U.S. alliance presence right up against China’s borders.

Conversely, China exercises leverage in negotiations with other countries over the denuclearization of North Korea because of this relationship. At the end of 2017, when China reportedly cracked down on illicit border trade, North Korea’s total exports declined 37 percent. This outsized control that China has over the North Korean economy, and by extension, the development of Pyongyang’s domestic nuclear and weapons development programs, leads China to try to extract concessions from the United States on other fronts.

As the United States and China enter into a deeper economic competition, formal talks on North Korea’s denuclearization process have languished. This shows that China has linked the issues of trade and North Korean denuclearization, refusing to use its leverage when other talks are at odds.

The United States should not accept this double game. In the process of convincing North Korea to denuclearize, the United States should call out China for enabling the continued development of North Korea’s weapons and nuclear programs and repeatedly raise these issues in their talks with China. Internationally, the U.S. Treasury Department should also continue to prioritize proliferation finance issues during its presidency at the Financial Action Task Force, the global standard setter for financial crime regulation, especially because China will take over the presidency in July.

The Treasury Department should also work with high-risk jurisdictions around China, such as Hong Kong and Singapore, to encourage further cooperation on proliferation finance issues. The United States could consider launching a pilot partnership with the two jurisdictions, combining trade and financial data in order to fully understand the proliferation finance landscape.

As the United States continues to combat what former Secretary of Defense Jim Mattis called the “most serious threat,” it should highlight proliferation finance and China’s role in creating a financial network of mass destruction.

Ashley Feng is a research assistant for the Center for a New American Security’s Energy, Economics, and Security Program.