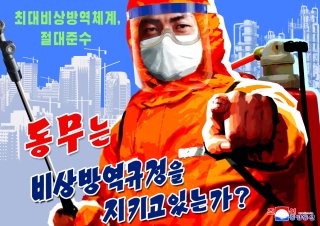 After more than two years of claiming that it had suffered no cases of coronavirus, North Korea admitted this spring that it was experiencing a debilitating outbreak of “fever.”

According to the Yonhap News Agency, health authorities in North Korea say they have narrowed down where the outbreak started, and that it was nearing the country’s border with South Korea, where some North Koreans came into contact with what they described as “alien things.”

“The investigation results showed that several persons coming from the area of Ipho-ri in Kumgang County in Kangwon Province to the capital city in mid-April were in fever,” the state-owned Korean Central News Agency (KCNA) said, per Yonhap. “A sharp increase of fever cases was witnessed among their contacts and that a group of fevered persons emerged in the area of Ipho-ri for the first time.”

The State Emergency Epidemic Prevention Headquarters, meanwhile, told North Koreans to “vigilantly deal with alien things coming by wind and other climate phenomena and balloons in the areas along the demarcation line and borders.”

The report also said that North Korea has seen a total of 4.74 million cases as of Thursday, while the regime claims that 4.73 million have recovered.

Kyle Lockart, a resident physician at the University of Illinois Chicago Hospital, told NK News that people, and not objects, are more likely to carry the virus. “As far as the ability of what we call fomites — inanimate objects — to maintain that virus and spread it, it’s not very likely … [The virus] is essentially cleared off of hard surfaces, or even porous surfaces, rather quickly. In order for a virus to survive and therefore spread, it has to infect a living cell.”

Meanwhile, Radio Free Asia reported Thursday that the North Korean military has designated this next month as “Anti-U.S. Joint Struggle Month,” in reaction to what the regime considers an unwillingness on the part of the United States to negotiate with Pyongyang. The “month” started on June 25 and will extend through July 27.

“The General Political Bureau of the People’s Army… created new anti-U.S. education materials that say the U.S. is our main enemy and sent it down to all the subordinate units. From the 25th, all units… have been attending anti-U.S. classes during their mental education hours, which are held each day for about an hour,” RFA’s source said.