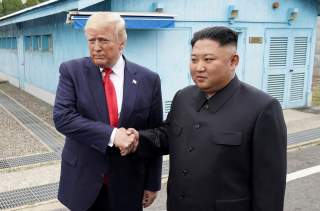 President Donald Trump’s visit to South Korea after the G-20 meeting in Osaka, Japan was supposed to be a quick check-in between friends. Trump would meet with South Korean President Moon Jae-in to talk about progress (or rather the lack thereof) in getting North Korea to denuclearize as well as celebrate a new trade agreement Washington and Seoul recently closed.

Trump, however, wanted something special to happen on this trip. And with a spontaneous tweet asking North Korean leader Kim Jong-un to stop by the DMZ and say “hello,” the president set things in motion for one of the most historic images the world has seen in the 21st century.

Shortly after receiving a briefing from U.S. commanders along the fortified North-South border as he peered over the horizon at an observation post—something previous American presidents have done for decades—Trump became the first to step across the line into North Korea. Kim Jong-un was swept with emotion, seemingly overwhelmed by the moment and flabbergasted it was happening at all.  “I never expected to meet you in this place,” Kim told Trump as the two shook hands. Neither did many of Trump’s own advisers, who were forced to organize a historical event in less than a day.

Later on, after they spoke for roughly an hour, Kim appeared deeply appreciative of what Trump did. “This has a lot of significance because it means that we want to bring an end to the unpleasant past and try to create a new future, so it’s a very courageous and determined act,” he told reporters.

There were no comprehensive agreements made, nor would it have been smart or realistic to expect any. Pyongyang will continue producing nuclear bomb fuel. Washington will still continue to keep the sanctions on—indeed, the Senate passed a defense policy bill last week that would cut off any entity doing business in the North from doing business in the U.S. Denuclearization remains a mirage in the desert. And if U.S. officials were being honest with themselves, they would heed the advice of the U.S. intelligence community, which assessed that Kim is highly unlikely to ever give up his nuclear weapons no matter what Washington offers.

But as Trump has said ever since he dropped the “fire and fury” and replaced it with personality-driven diplomacy, there is no rush. In Trump’s mind, rushing things would be a disaster and could very well collapse the entire edifice.

The detractors will claim this is all a waste of time, another attempt by Trump to polish a turd. Joseph Yun, a former U.S. special envoy to North Korea, questioned on CNN what the Trump-Kim meeting at the DMZ would achieve in the long-run. "I'm not sure what it is that President Trump is trying to accomplish,” Yun said, “because while all this engagement has gone on, there has been no decline in the stockpile of North Korean nuclear weapons or missiles." Senate Minority Leader Chuck Schumer dismissed the entire event as a nothingburger, just one more episode in the Trump reality show presidency we are living in.

And yet none of the critics can point to an alternative. If denuclearization has an even remote chance of being successful, talking—and yes, compromising—is required however much we would rather snub our noses to diplomacy and pressure Pyongyang into signing a surrender document. The agreement to resume working-level talks breathes a little more life into a diplomatic process that was losing oxygen in the four months since the Hanoi summit. Where those talks go and whether the North Koreans will treat Stephen Biegun with even a smidgeon of seriousness is still to be determined. But at least a process is now resurrected.

Trump’s walking across the DMZ into North Korea was more than reality TV or an act of vanity—it was, as Kim said, a visible demonstration by the U.S. president to begin a new relationship. This is what the North Koreans have been looking for. If Kim wants peace with the U.S. to be more than a dream, he needs to empower his own negotiator to make tough choices once the working-legal talks resume. And if Trump hopes to become the peacemaker of the Korean Peninsula, he needs to give Biegun the file, lock John Bolton out of the deliberations, and understand that demanding too much of the North Koreans will kill off the hope and sense of possibility engendered over the weekend.