Poll: 46% of South Koreans Willing to Get Vaccinated Immediately 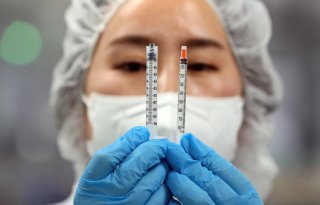 A new nationwide poll has discovered that less than half of South Koreans are willing to get vaccinated against the coronavirus immediately.

The survey, commissioned by the radio broadcaster TBS, received responses from a thousand twenty adults over the age of eighteen. The data pointed to only 45.8 percent saying that are on-board with getting inoculated “right away”—without waiting for further reports on the vaccines’ side effects.

The poll further revealed that 55.8 percent of the respondents have confidence in the Seoul government’s handling of the national vaccination program, while 41.1 percent have distrust in the process.

The survey’s results come as the country of fifty-two million is slated to launch its mass vaccination program with the AstraZeneca doses on Friday—starting with staff members and patients aged below sixty-five at nursing homes, rehabilitation facilities, and sanatoriums across the country. The government has decided to postpone the use of AstraZeneca’s vaccine for seniors aged sixty-five and older, pending results of further clinical trials.

In addition, the first batch of Pfizer’s vaccine will be offered to medical staff members starting on Saturday.

South Korea, which has previously stated that it hopes to achieve herd immunity by November, has seen daily coronavirus cases hover in the three hundred to four hundred range for the past several days.

In recent days, however, health authorities have expressed concern that the Lunar New Year's holiday, which ran from Feb. 11–13, may have led to a large number of transmissions via asymptomatic individuals.

“The number of daily COVID-19 cases is expected to climb later this week, considering the effect (of fewer tests on the weekend) weakens,” one official was quoted as saying by the local newswire service Yonhap News Agency.

It has been reported that there were more than five thousand coronavirus-related violations over the extended holiday. For the duration of that period, there was an active ban, which had been in place since late December, on private gatherings of five or more people.

However, the government has since relaxed the measure somewhat by allowing gatherings between senior parents and their sons and daughters living in separate residences regardless of the number of people.

The new coronavirus variants that have surfaced around the world have also complicated the nation’s ongoing battle against the virus. To date, it has identified one hundred twenty-eight such cases, with those traced to the United Kingdom accounting for a hundred three.